Home » SHUT UP AND LISTEN – TED NUGENT TALKS NEW ALBUM, RETURNING TO THE ROAD, AND MORE

SHUT UP AND LISTEN – TED NUGENT TALKS NEW ALBUM, RETURNING TO THE ROAD, AND MORE 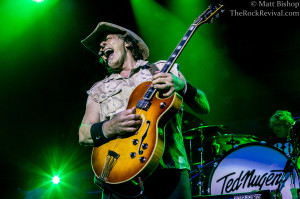 The Motor City Madman is back, and it’s time to shut up and listen. Guitar god Ted Nugent released his much-anticipated 17th LP back on July 8, and he’s currently out on a North American tour supporting it. The new disc Shut Up & Jam! is Nugent’s first studio effort since 2007’s Love Grenade. Back in June, The Nuge kicked off his summer tour at Sweden Rock Festival alongside Black Sabbath, Megadeth, Volbeat, Rob Zombie, Alter Bridge, Billy Idol, Monster Magnet, W.A.S.P., and many more. Now, he’s currently trekking across the U.S. with support from fellow Detroit hometown heroes Pistol Day Parade. Nugent is alive, well, and loud as ever. On this current tour fans will see The Nuge roll through a meaty 15-song setlist that includes hits like “Free For All”, “Stranglehold”, “Cat Scratch Fever”, and many more. In the wake of all this renewed madness, The Rock Revival caught up with the Wildman himself to talk about his new disc, getting back on the road, and much more.

The Rock Revival – “How does it feel to be back on the road touring again?” 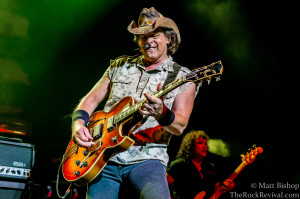 Ted Nugent – “I’m afraid you will have to use the deepest depths of your imagination to attempt to visualize but a sliver of the joys and excitement we experience every glorious summer when our tours erupt. Performing my killer songs with this killer band for these killer music loving audiences every night is an indescribable celebration beyond words. Each gig has a life of its own and the spirit and energy of each night is off the charts stimulating on all human levels and beyond. Lucky, lucky me! 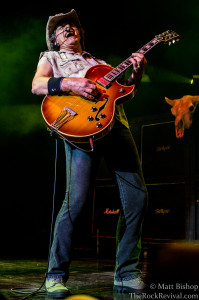 The Rock Revival –  “Shut Up & Jam! is your first new album in 7 years. Did you have a lot of material stocked up to choose from?”

Ted Nugent – “My home life is beyond any dream come true. We live in Texas which is clearly the last best place, so our freedom driven life is virtually exhilarating and fun beyond words. Hunting  everyday with my incredible wife Shemane and our two awesome Labrador retrievers is always jam packed with excitement and adventure. Such a down to earth, hands-on conservation lifestyle so thoroughly cleanses the soul and overcharges the batteries that each and every time I grab a guitar, grinding, grooving, masterpiece guitar patterns and licks fill the living room and the songs simply cannot be stopped. I play everyday and therefore write new songs everyday, so there is never a shortage of new material. How cool is that?!” 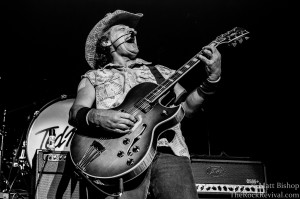 Ted Nugent – “Sammy & I come from the same American black soul music, blues, R&B&R&R school of authoritative high energy fun music, so our threat to make killer music together was indeed long overdue. He is one of the all-time greats and his killer performance on this classic blues-based jam song is exactly what we both love.”

The Rock revival – “Any big plans heading into the fall?” 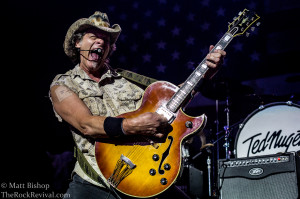 Ted Nugent –  “I attribute my happiness, career longevity, overall health and youthful craving for life itself and the music to the definitive balance in my life that my hunting, outdoor and quality family time I orchestrate every fall and winter between tours provides. Such a quiet, down to earth lifestyle literally cleanses my soul, clears my head, relieves my ears and fortifies my spirit. My life is literally perfect. There is no question that my 2014-15 hunting season will be the best ever. My Labradors told me so.”

The Rock Revival – “New album, new tour…is there any signs of slowing down for Ted Nugent?”

Ted Nugent – “My band, music, and I will remain a force to be reckon with for a very, very long time. I discovered the perfection of a smart, balanced life in my teen years, and fortify my very being with massive spirit juice every fall/winter hunting season. Clean and sober my entire life is the key. That being said, I am well aware of the reality of aging and will improvise, adapt and overcome as long as it is healthy for me to do so, but gravity will eventually catch up to me in my early 100s I’m sure.”

Ted Nugent is one of the greatest and most infamous solo artists of all time. Throughout his 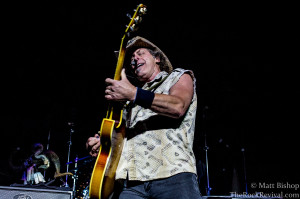 career, he’s sold over 30 million records worldwide. In addition to his solo fame, Nugent also found success with his first band Amboy Dukes and later on with Damn Yankees. While he has penned many classic hits, his signature smash “Cat Scratch Fever” is undoubtedly one of the greatest hard rock songs ever written. Now, Nugent’s new album Shut Up & Jam! recently debuted at #26 on the Billboard Top 200 and features a special guest appearance from Sammy Hagar on the single “She’s Gone”. Nugent’s current U.S. tour run wraps up on August 8 in Fort Worth, TX. – by Matt Bishop 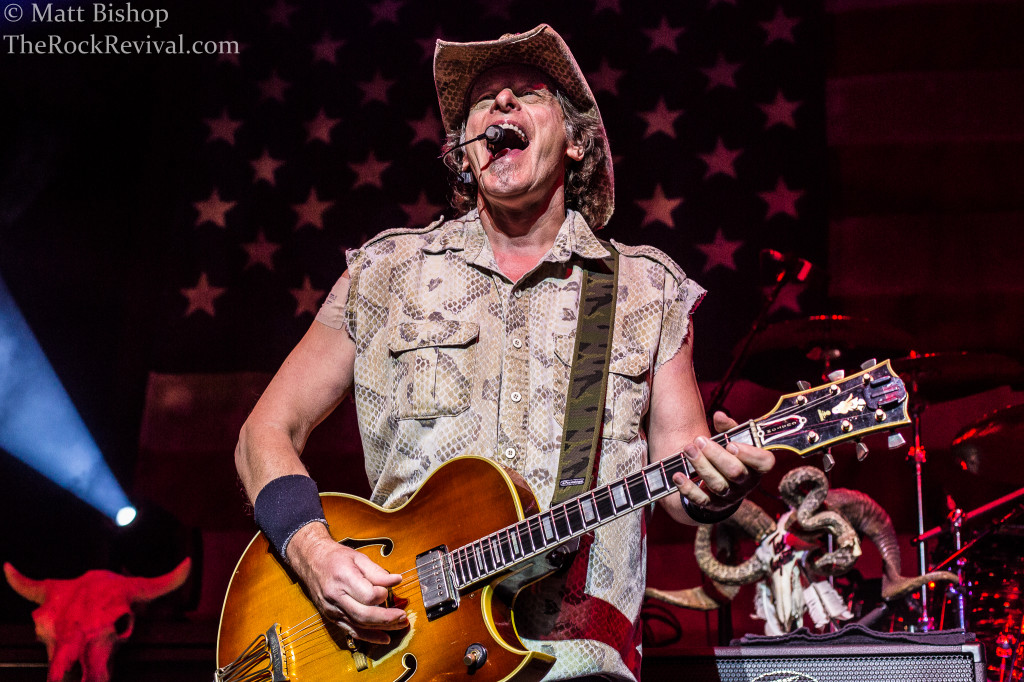