Shock rock icon Rob Zombie has announced a fistful of U.S. tour dates for Spring 2014. The brief trek kicks off on Saturday, April 26 in Fort Myers, FL at Monster Energy’s Fort Rock Festival and wraps up on Saturday, May 10 in Philadelphia, PA at 93.3 WMMR’s MMR*B*Q. The band is currently tearing up Australia on the massive Soundwave Festival. From there, they head to Singapore, China as well as Mexico. After their U.S. run, Zombie will hit the European festival circuit, with stops at Sweden Rock Festival, Rock am Ring (Germany), Download Festival (UK), Novarock Festival (Austria), Aerodrome Festival (Hungary, Czech Republic), and Hellfest in France, Spain, Italy, Switzerland, Netherlands, Denmark, Poland and Finland. Zombie is still touring off his latest album, Venomous Rat Regeneration Vendor, which debuted at #7 on the Billboard Top 200 and ranked #36 on TheRockRevival.com’s list of the Top 50 Rock Albums of 2013.

Rob Zombie is one of the greatest solo artists in rock music history. Starting out with his 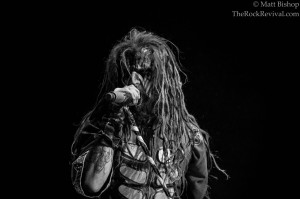 band White Zombie in 1985. In 1992, the band found mainstream success when they signed with Geffen Records and released their third album, La Sexorcisto: Devil Music Volume One. The album hit #26 on the Billboard Top 200 and eventually went double-platinum. In 1995, White Zombie teamed up with renowned metal producer Terry Date to release Astro-Creep: 2000. The album peaked at #6 on the Billboard Top 200, and it would also be their last outing. In the summer of 1996, the band toured with the almighty Pantera on their summer tour. 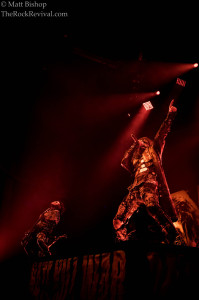 In 1998, Zombie went solo and released his debut album, Hellbilly Deluxe. The disc debuted at #5 on the Billboard Top 200, and spawned three monster singles. It went on to sell over 3 million copies in the U.S. alone. Zombie’s sophomore effort, 2001′s The Sinister Urge, The album went double-platinum, and gave Rob his second Top 10 debut on the Billboard Top 200. In 2006, Zombie teamed up with guitar virtuoso John 5. The next two Zombie albums – 2006′s Educated Horses and 2010′s Hellbilly Deluxe 2 – each debuted at #5 and #8 respectively on the Billboard Top 200, and featured a stripped down, riffier sound thanks to John 5′s influence. Rob Zombie released his fifth studio LP, Venomous Rat Regeneration Vendor, back in April on his own label, Zodiac Swan. The first Zombie album to feature drummer Ginger Fish. Throughout his career, Rob Zombie has been nominated for seven Grammy Awards. – by Matt Bishop (Rob Zombie Live Photo Gallery)