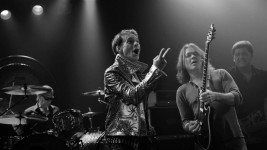 Last night, hard rock icons Van Halen performed their classic hits “Panama” (streaming above) and “Runnin’ with The Devil” (streaming below) in the middle of Hollywood Boulevard on Jimmy Kimmel Live!. It was the band’s first U.S. television performance since reuniting with original frontman David Lee Roth in 2007. The second installment of the band’s performance will air tonight at 11:35pm EST|10:35… Continue reading 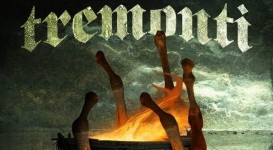 Guitar virtuoso Mark Tremonti and his solo outfit Tremonti have unleashed a brand new track “Another Heart” from their upcoming sophomore effort Cauterize. The album is due out in May via Fret12 Records. The song new single is available for download now on iTunes. The band’s debut All I Was hit #29 on the Billboard Top 200 and #5 on Billboard… Continue reading 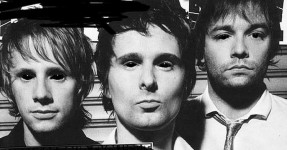 Muse have premiered a new lyric video for “Dead Inside”, the first official single from their upcoming new album Drones which is due out on June 9 via Warner Bros. Records. The band recently dropped another new song from the album titled “Psycho”. The band worked with renowned rock producer Robert “Mutt” Lange (AC/DC, Foreigner, Maroon 5, Nickelback,… Continue reading

Breaking Benjamin have premiered their brand new single “Failure”. The song is the first single off their long-awaited new album and can be streamed above. The new disc titled Dusk Before Dawn will hit record stores on June 23 via Hollywood Records. It will be the band’s fifth studio effort and the follow up to 2009’s Dear… Continue reading