Drummer Phil Rudd of heavy metal legends AC/DC has been charged attempting to procure the murder of two men, according to New Zealand’s Bay of Plenty Police District representative Kim Perks. He was also charged with threatening to kill, possession of cannabis, and possession of methamphetamine. The names of the men he allegedly tried to have killed and the name of the alleged potential hitman that he tried to hire have not been released. Rudd entered no plea to the charges at the Tauranga District Court. He is out on bail until his hearing on November 27. There is no word yet on how this will affect AC/DC’s world tour plans for 2015. 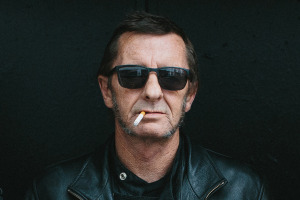 The band’s much-anticipated new album Rock or Bust comes out December 2 via Columbia Records. The album was produced by Brendan O’Brien and mixed by Mike Fraser, both of whom worked on the band’s previous effort Black Ice. The disc debuted at #1 on the Billboard Top 200 and sold over 784,000 copies in it’s first week of sales. It was one of only two albums the band released that decade (Stiff Upper Lip, 2000). The disc garnered the band the Grammy Award for Best Hard Rock Performance for the track “War Machine”. Sadly, the new disc will be the band’s first without founding rhythm guitaristMalcolm Young, who recently announced his official retirement from the band due to illness. Stevie Young, nephew of Malcolm and lead guitarist Angus Young, played rhythm guitar on the new album and will tour with the band in 2015. Tour dates are expected to be announced before the new year. AC/DC are undeniably one of the greatest music artists of all time. To date, the band has sold over 200 million albums worldwide and have produced some of hard rock and heavy metal’s biggest anthems. – by Matt Bishop