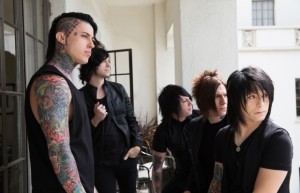 After years of battling in one of music’s biggest feuds in recent years, new age heavy rockers Falling In Reverse (top left) and Escape The Fate (middle right) are set to embark on a tour together in the new year. Lead vocalists Ronnie Radke (Falling In Reverse) and Craig Mabbitt (Escape The Fate) finally stopped butting heads, and shook hands. The bands collectively decided to hit the road together, appropriately calling it the Bury The Hatchet Tour. The historic run kicks off on January 15, 2014 in Los Angeles, CA and comes full-circle on February 14 in Pomona, CA with special guests Chelsea Grin and Survive This!.

Despite their history of bad blood, both bands seem to be very stoked about the tour. “There are surprises and special 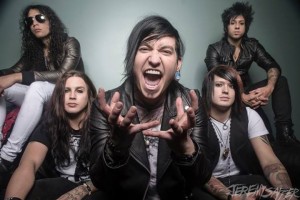 things happening on this tour that you’ll only find out about if you come – people can expect the unexpected,” said Falling In Reverse frontman Ronnie Radke.  “This tour will change the long-standing tension with Escape The Fate – we’re now friends and all is forgiven.” Escape The Fate vocalist Craig Mabbitt commented, “This tour means new beginnings and I couldn’t be happier to be doing it.  And, oh yeah, it’s gonna be fuckin wild!  Missing this tour would be equivalent to Santa putting coal in your stockings, and no one likes coal in their stocking.” 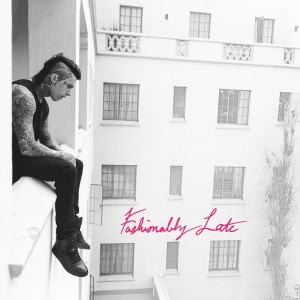 Falling In Reverse exploded onto the scene in 2011 with the release of their debut smash hit, The Drug In Me Is You, via Epitaph Records. The disc hit #19 on the Billboard Top 200 and sold over 18,000 copies in it’s first week of sales. A huge success, the album produced four hit singles. That same year, the band played their first-ever live shows on the Vans Warped Tour. The band toured relentlessly for the next two years with the likes of Black Veil Brides, We Came As Romans, Eyes Set To Kill, and more. They also appeared at Rock On The Range in May 2012. In June 2013, they released their sophomore effort, Fashionably Late. The album debuted at #17 on the Billboard Top 200. To support the record, the band embarked on the Vans Warped Tour once again in the summer of 2013. So far, the band has released two singles from the album – “Alone” and “Fashionably Late”. Falling In Reverse kick off their intimate acoustic tour this week, An Evening with Falling In Reverse – Unplugged and Uncensored.

Escape The Fate released their first effort with lead vocalist Craig Mabbitt in 2008, This War Is Ours. The 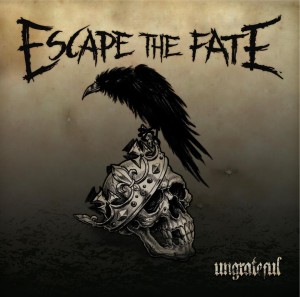 album hit #35 on the Billboard Top 200 and sold over 13,000 copies in it’s first week of sales. The band toured in support of the album with Chiodos and Silverstein. Their 2010 self-titled follow-up debuted at #25 on the Billboard Top 200 and #1 on Billboard Hard Rock Albums. Legendary guitarists Mick Mars of Mötley Crüe and John 5 of Rob Zombie each co-wrote a song on the album. In the summer of 2011, the band toured on the Rockstar Energy Drink Uproar Festival. That fall, the band secured a slot at the 48 Hours Festival in Las Vegas. In 2012, the band toured with Attack Attack! on the This World Is Ours Tour, and that same year they signed with Eleven Seven Music. In 2013, they released their fourth studio LP, Ungrateful, which landed at #27 on the Billboard Top 200. This year, the band has toured with the likes of Papa Roach, Otherwise, Hollywood Undead, and more. The band just wrapped up The Wrong Side of Heaven Tour with Five Finger Death Punch, Miss May I, and Gemini Syndrome. On November 9, Escape The Fate will head overseas for a month-long European run starting November 9 in Germany and ending with two Vans Warped Tour Europe dates on November 23 and November 24. – by Matt Bishop 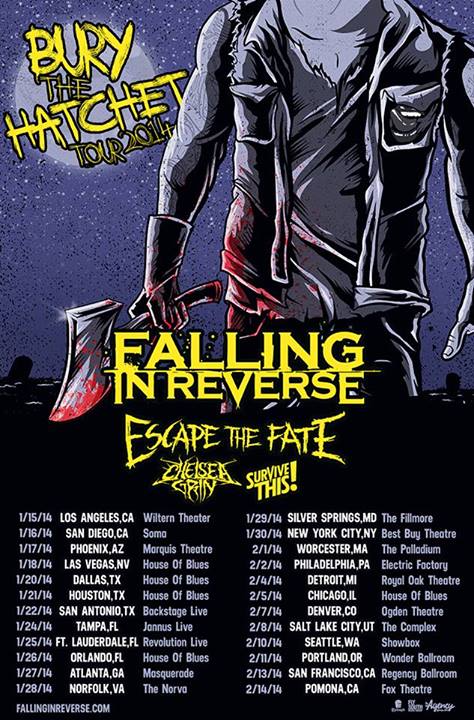