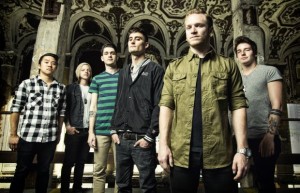 One of the reasons I came to Warped Tour was to interview We Came As Romans. Mission accomplished. Backstage at Warped Tour ’13, I got a chance to sit down with vocalist Dave Stephens to talk about the tour, the band’s latest album, and his boat. We talked a lot about the commercial success of their last album, Understanding What We’ve Grown To Be, which hit hit #21 on the Billboard Top 200. All three of the band’s studio LP’s were released on Equal Vision Records, and all charted in the Billboard Top 200. Throughout their career, the band has toured and performed with the likes of Asking Alexandria, Silverstein, August Burns Red, Falling In Reverse, Attack Attack!, and many more. This fall, the band will tour overseas on the Vans Warped Tour UK with Yellowcard, Billy Talent, Escape The Fate, Memphis May Fire, The Wonder Years, and more. We Came As Romans and Parkway Drive will embark on the Vans “Off The Wall” Music Night Tour, which kicks off in November and features special guests Memphis May Fire and Like Moths to Flames. Their latest album, Tracing Back Roots, which came out on July 23, hit #8 on the Billboard Top 200 and sold 26,500 copies in it’s first week of sales. – by Matt Bishop