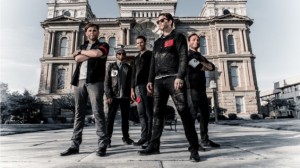 Third time’s the charm for Hawthorne Heights, who are on their third Warped Tour this summer. The band is touring in support of their fifth studio album, Zero, which came out back in June. The album’s release could not have come at a more opportune time, with Warped Tour giving the band the ultimate platform to promote it. I got a chance to sit down with bassist Matt Ridenour and guitarist Mark McMillon backstage at the 20th Warped show of the summer in Camden, NJ. When I asked what the reaction to the new record has been like, Ridenour stated, “Really good. Everybody seems to really like it. Hawthorne Heights exploded out of the gate with their  first two albums, 2004’s The Silence in Black and White, and 2006’s If Only You Were Lonely, both of which were certified gold by the RIAA. Their second album hit at #1 on the Billboard Independent Albums chart and #3 on the Billboard Top 200. Hawthorne Heights released their fourth studio LP, Skeletons, via major label Wind-Up Records on June 1, 2010. The album hit #50 on the Billboard Top 200. The band has a big fall tour announcement coming soon, and a new music video is currently in production. – by Matt Bishop