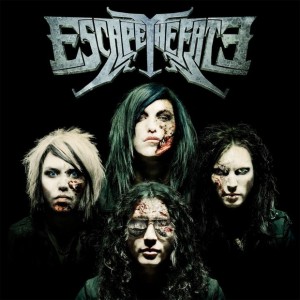 Escape The Fate had just gotten off stage when I sat down with them at Rock On The Range 2012. Lead singer Craig Mabbitt and bassist TJ Bell said they were honored to play Rock On The Range This year. “The crowd was so amazing,” Mabbitt said. The band has played the festival before, but this year they were invited to play the Monster Main Stage.
The band is currently touring on their 2010 self-titled album, Escape The Fate, but have new music on the way. The new album is due out in September. “Our last two records were very different from each other, and we wanted to mix all the elements together on one record this time,” Mabbitt stated. As far as the bands upcoming plans go, they’re immediate. “We really wanted to stay and catch Manson and Zombie, but we gotta catch a plane right after this,” said Bell. The band is headed to South American for another tour run.
Escape The Fate just finished up the This World Is Ours Tour with Attack Attack!, who were also on the bill for ROTR 2012. After ROTR, the band is headed to South America for a co-headlining run with Underoath and special guest Protest The Hero. The new album, untitled as of yet, is set for a tentative September 2012 release. Grab your tickets, South America…Escape The Fate is comin’ for ya. – by Matt Bishop
Prev Post

War On The Range: Caleb Shomo of Attack Attack!