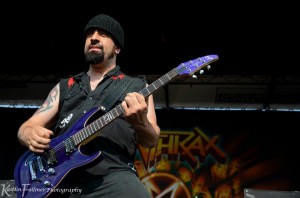 With just under a month to go until the 55th Annual Grammy Awards, nominees Anthrax have announced that lead guitarist Rob Caggiano has left the band. The the specific reason(s) for the split are uncertain, however it seems to be on good terms. The remaining members of Anthrax released this statement today regarding Caggiano’s departure:

“Rob has been an integral part of Anthrax for so many years, as our lead guitarist, in a production capacity, but most of all, as our close friend.  His contributions to the band have been enormous. While we are sad that he is leaving, we wish him nothing but great success going forward, and hope to share the stage with him again sometime down the road. With the Metal Alliance Tour on the horizon, we have been considering several lead guitarist options, and will be making an announcement on that shortly.” – Anthrax

Rob Caggiano has released this statement himself:

“I’m extremely proud of my time in Anthrax. Actually, that’s an understatement! We accomplished so many great things together over the years and I shared some of the best times of my life with these guys. As a band, we also weathered quite a few storms along the way. It’s been a wild ride (to say the least) from Day One and I wouldn’t change one single thing about the last 12 years. This is an extremely difficult and emotional decision for me to make but my heart is just steering me in a different direction right now. I’ve always been one to follow my heart in everything that I do and while this might be one of the hardest decisions I have ever had to make, it feels like the right one for me at this time. Scott, Charlie, Joey, Frankie (and John Bush) will always be part of my family and this decision doesn’t change the way I feel about that in the slightest. I would also like to say thanks to all the amazing fans I’ve met and hung out with worldwide over the years. You guys always were and always will be the reason why I make music! In this day and age, being a musician isn’t always easy – also an understatement – but the fans truly make it worthwhile for me. I hope to see each and every one of you again really soon. The fact that Anthrax is at the top of their game right now and totally ‘out for blood’ after all these years is a testament to this band’s longevity and conviction! I’m truly honored to have been a part of their brilliant legacy. I can’t wait to get back in the recording studio again! Over the years, I’ve been blessed with the privilege of working with a wide range of great bands/artists from Anthrax and Cradle of Filth all the way to Bruce Springsteen, and I look forward to a hopeful continuation of that side of my career while I figure out my next move as an artist. BTW in case anyone was wondering after reading all of this, I do FULLY intend to get back out there on the road very soon in some way shape or form….it’s in my blood!” – Rob Caggiano

I got the chance to sit down and interview Rob twice on the Worship Music World Tour. He’s a very cool dude, and a real shredder. 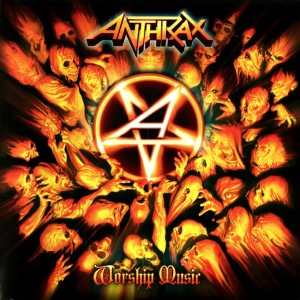 Most recently, we caught up at Rock On The Range 2012 in Ohio back in May. We talked a lot about the massive success of their new album, and their then upcoming set on Rockstar Energy Drink Mayhem Festival. I wish Rob all the best in his future, and I hope to see him back playing music again soon!

Anthrax have long been titans of thrash metal. Deemed one of the “Big 4″ of thrash metal (along with Metallica, Megadeth, and Slayer), They band has been in the business for nearly 30 years. In the last two years, the Anthrax has played some of the world’s biggest festivals and stages, and released one of their best albums ever. 2011′s Worship Music is the band’s first new album in 8 years, and marks the return on long-time vocalist Joey Belladona. The album debuted at #12 on the Billboard Top 200. The band toured this past summer on the Rockstar Energy Drink Mayhem Festival along with Slipknot, Slayer, Motörhead, The Devil Wears Prada, As I Lay Dying, Asking Alexandria, and more. Anthrax are nominated for a Grammy this year for Best Hard Rock/Metal Performance for “I Am Alive” off of Worship Music. This year’s Grammy Awards are set to take place on February 10, 2012 at 8/7c on CBS. – by Matt Bishop (Top Left Photo Courtesy of Kaitlin Follmer Photography)