Things got a little Wild at the Crocodile Rock Cafe for what would be my last show at the venue. Two days ago, the legendary Croc Rock closed it’s doors indefinitely. I didn’t know at the time that Black Veil Brides would be my last show there, but what a way to go out. Before the Church of The Wild Ones Tour tore up Allentown, I got a chance to sit down with bassist Ashley Purdy and drummer  Christian “CC” Coma to talk about their new record, epic tour, and much more.

When talking about the new album, Ashley said, “I think generally for this record, it was to do something that someone else hasn’t really done before. It was like new ground for us.” CC added, “We were working with a real producer this time, John Feldmann, and we were all on the same page. It was a complete different recording process than on the last two albums. Working with him definitely brought us out of our comfort zone. The whole goal is to take things to the next level.”

The new album is the band’s highest-charting debut ever, clocking in at #7 on the Billboard Top 200. I asked if the guys thought that they were “representing rock” in a commercial world filled with “popular music”, and Ashley replied, “I think we embrace that. I think when we first started, we were always the ones who were saying, ‘We’re gonna carry the torch for our predecessors’, where now I think we’re carrying our own torch. We’re just ‘us’, and we’re doing what we want to do.” Throughout their career, BVB have always carved their own niche in the vast melting pot of rock music. “I think it’s a tribute to the fans,” CC added. “It seems like the rock genre is disapearing from everybody’s radar. You just don’t see it anymore, so I think it’s a testament to our fanbase for putting us at #7.”

Black Veil Brides arrived on the scene in 2009 with their independent debut LP, We Stitch These Wounds, which debuted at #36 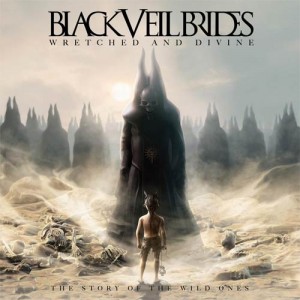 on the Billboard Top 200 and #1 on the Billboard Independent Albums chart. In 2011, the band supported the Murderdolls on their God Save The Scream Tour in the UK. In April 2011, Black Veil Brides won the Revolver Golden God Award for Best New Artist, and the Kerrang! Magazine Award for Best Newcomers. In June 2011, the band released their sophomore effort, Set The World On Fire, on June 14. Ten days later, the band embarked on a string of dates on the Vans Warped Tour. Later that year, the band hit the road with Avenged Sevenfold and Asking Alexandria on the Buried Alive Tour. Throughout the year, Black Veil Brides played epic festivals like Download Festival, Bamboozle, and Rock am Ring.

To hold fans over until the next LP, BVB released the Rebels EP in December 2011, which featured a cover of Billy Idol‘s classic, “Rebel Yell”. That same year, BVB guitar duo of Jake Pitts and Jinxx won the Revolver Golden God Award for Best Guitarists. In 2012, Black Veil Brides released their much-anticipated new album, Wretched and Divine: The Story of The Wild Ones. The album debuted at #7 on the Billboard Top 200, marking their biggest commercial success yet. The album was accompanied by a film, entitled Legion of The Black, which tells the story of the album’s concept; the tale of a group of rebels known as The Wild Ones. Black Veil Brides are nominated for three 2013 Revolver Golden God Awards, and a win would make them the first band ever in Revolver Awards history to win a Golden God three years in a row, so be sure to get online and vote for the band. After this US tour leg, then band heads overseas for a brief UK run, then returns to the States for the second US run. Then, it’s off to Europe, Australia, South America, and many more countries for a world tour. This summer, the band will be headlining the Vans Warped Tour. Black Veil Brides are going worldwide, so get your tickets, and get ready to get Wild. – by Matt Bishop