Home » Posts tagged "3 doors down us and the night" 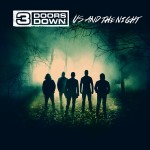 3 Doors Down have announced their upcoming new album Us and The Night.  The disc is due out on March 11 and will be the band’s sixth LP, and their first outing of all new material since 2011’s Time of My Life which debuted at #3 on the Billboard Top 200. The album’s lead… Continue reading