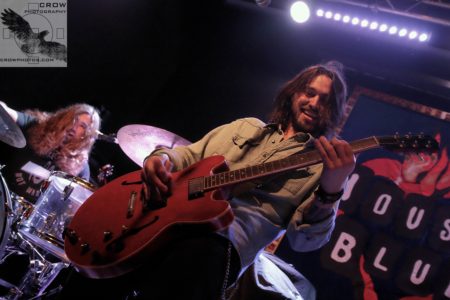 Them Evils – Jordan Griffin, Jake Massanari and David Delaney – rocked the Voodoo Room at the House of Blues in San Diego, California on April 7, 2018, setting the stage for Red Sun Rising. It has been truly exciting to watch this band grow since seeing them open the Alter Bridge show at the Wiltern Theatre in L.A. a year earlier.

The driving force behind their music is the need to deliver “high powered street rock n’ roll, and being better than the people before them” said Jordan Griffin during an interview at Aftershock 2017. There are so many influences such as Led Zeppelin, AC/DC, Queens Of The Stone Age and Soundgarden, and classic rock is at their cores. They are inspired by everything around them – “daily life, heartache, breakups, love, sex, drugs, and rock n’ roll”. For example, their new single, “Got Me Rockin’”, is about driving with a chick in a car. When they initially recorded the song, the chorus was not working for them and the lyrics weren’t good enough. Then, while driving home from the studio, the lyric, “rolling stoned and living free”, literally hit and the song was recorded the following week. So, the driving force for them at that time was literally driving on the road… which later became the title for their new EP, “Rollin’ Stoned and Livin’ Free” being released in May 2018. 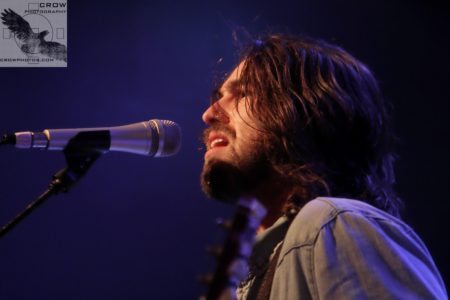 This has truly been a year of growth for Them Evils. They toured with Zakk Sabbath, which they said was “a legendary, epic, humbling, and most incredible experience”. Being on tour with a “rock supergroup cover band” was great as each member in the band are people they’ve looked up to for inspiration for years. They felt like “fan boys on tour with Zakk Sabbath, traveling in rock n’ roll heaven”. They all agreed that “heaven is real and it’s being on tour with Zakk Sabbath.” Zakk Wylde not only let them borrow his amp daily, but was so down to earth and smelled so good “like medieval times!”, which in wonderment I wasn’t sure if that was a good or bad thing, but they said “it was something great!”

Them Evils just wrapped up writing and recording sessions, which is “a collaboration of all band members, where we sit in a room and let ideas flow out”. The band has just released their scorching new single “Got Me Rockin'”, now available on all major digital streaming & sales outlets. The EP of new material will be released on May 4th through Burning Records. It was recorded and produced by Kato Khandwala (The Pretty Reckless, Blondie, Drowning Pool, Pierce the Veil). Songs like “She Got Nothin’” and “Practice What You Preach” are rocking jams that have great messages behind them. 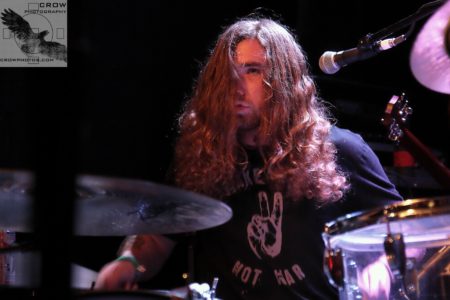 Like a family, this trio said they fight like brothers sometimes, but they are always on the same page when it comes to their rocking. For a night of good ole rock n’ roll, Them Evils is a must see when they come to a town near you!

Connect with Them Evils:

Them Evils photos from the House of Blues San Diego April 7, 2018: