Winter is heating up as many rock acts are preparing to hit the road early in 2013. Among those are Stone Sour, Papa Roach, and Otherwise, who made a major announcement today about their collaboration for a U.S. winter tour run. The tour, which kicks off in my hometown of Bethlehem, PA on January 20, will run through February 17. More shows will be added in the eminent future. Stone Sour and Papa Roach are finishing up their respective European tours, where both bands actually played a few gigs together. Otherwise are currently wrapping up their fall tour with some headlining dates. Throughout the run, they supported 3 Doors Down, Daughtry, and My Darkest Days.

Otherwise have been grinding it out since I first met them back in October 2011 at 48 Hours Festival. Their major label debut, True Love Never Dies, was released on Century Media Records in early 2012. The album’s lead single, “Soldiers”, has sold over 10,000 copies on iTunes. They have been touring relentlessly for the past 2 years, playing festivals like 48 Hours, Rock On The Range, and Rock Allegiance, as well as supporting bands like Pop Evil, Hellyeah, Puddle of Mudd, Buckcherry, Taproot, and Hurt.

Papa Roach exploded onto the mainstream scene in 2000 with their major label debut, Infest, which was certified triple-platinum and hit #5 on the Billboard Top 200. The band’s next 4 albums would all debut in the Top 25 on the Billboard Top 200. The band recently contributed a new single, “Even If I Could”,  to the soundtrack for the blockbuster film The Avengers.  Their latest record, The Connection, dropped on October 2. So far, the band has released two singles off the album.

Stone Sour released their 4th album, House of Gold & Bones: Part 1, back in October. The album’s lead single, “Absolute Zero”, hit #1 on Active Rock Radio. The album debuted at #7 on the Billboard Top 200. The sequel, House of Gold & Bones: Part 2, will be released in the spring of 2013. With only 4 albums under their belt, Stone Sour have sold over four million albums worldwide. Their self-titled debut and sophomore effort, Come What(ever) May, were both certified gold. Their third album, 2010′s Audio Secrecy, debuted at #6 on the Billboard Top 200. The band has been nominated for three Grammy Awards through the course of their career. 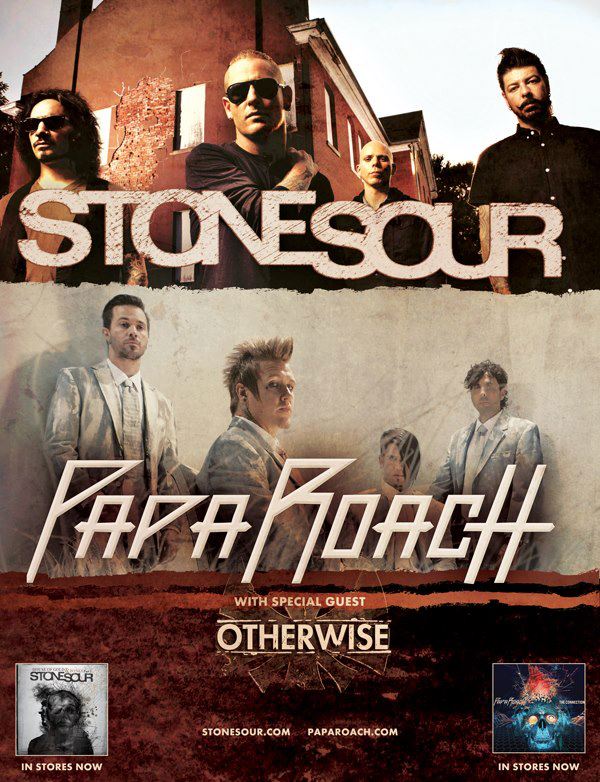