“The tour has been amazing,” Kakaty stated. “It’s been a great marriage between metal and rock. I think the more that we see rock bands and metal bands team up, hopefully it will create more opportunity for both of us.” Leigh and I talked more about the tour’s diverse lineup, and how Pop Evil have brought a a more rock ‘n’ roll sound to a tour with very heavy and extreme bands. “I think it’s about not taking the safe route, and I think most fans that appreciate rock music will appreciate that [playing on this tour].” As far as future material goes, Leigh commented, “We’re always writing, and we’re poised to write the biggest record of our career with this one.” 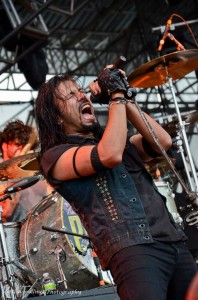 After releasing an independent album and 3-song EP, Pop Evil broke out with their major-label debut, Lipstick On The Mirror, in 2008. The band worked with Kid Rock producer Al Sutton on the record, and it spawned the hit single “100 in a 55”. The band proceed to tour with Buckcherry, Saliva, Whitesnake, and Judas Priest on their British Steel 30th Anniversary North American Tour.

Pop Evil have exploded onto the mainstream with the success of their sophomore effort, War of Angels, which hit #43 on the Billboard Top 200. The band just released the fourth single from the album, “Purple”. The album’s third single and huge radio hit, “Boss’s Daughter”, was co-written by Mötley Crüe guitarist Mick Mars, and Mars also makes a guest appearance on the track. On this album cycle, the band has toured with the likes of Drowning Pool, Trust Company, Finger Eleven, Escape The Fate, 3 Doors Down, Puddle of Mudd and Theory of a Deadman. The band is currently wrapping things up on the Trespass America Festival, with plans to head to Canada for a run with Black Label Society. With all the success of War of Angels, though, the band is showing no signs of slowing down. “We’ve been writing a lot,” Leigh said, “and after this tour is over, we plan on making our best record yet.” – by Matt Bishop (Photo Courtesy of Kaitlin Follmer (Amped Up Aperture Photography)

Welcome to the Revival of rock 'n' roll music. The way you used to hear rock, see rock, and feel rock is going to be shattered into a million pieces, reassembled, and revived. Dive into the realm of rock with interviews, concert coverage, and breaking news that make the music seem real again - in your ears, in your mind, and right in front of your very eyes. You'll feel the cool steel of the guitar strings and the smooth wood grain of the drum sticks right in your hands, all with the echoes of reverb in your head. This is the way rock was supposed to be experienced. Welcome to the Revival of rock 'n' roll music.
View all posts by Matt Bishop →
Tagged  Leigh Kakaty, Pop Evil, Trespass America Festival 2012.
Bookmark the permalink.