Musician and writer Henry Rollins once said, “Go without a coat when it’s cold; find out what cold is. Go hungry; keep your existence lean. Wear away the fat, get down to the lean tissue and see what it’s all about. The only time you define your character is when you go without. In times of hardship, you find out what you’re made of and what you’re capable of. If you’re never tested, you’ll never define you character.” These words never rang truer for me than the day I met George Dennehy.

George is a 17-year-old guitarist and singer who, amazingly, plays with his feet. George was born without arms, and his character has been tested every day since. He has risen to the occasion with grace, defying physical norms in order to fulfill his passion for music. At age 8, George began learning to play the cello. To this day, he is the only known person in the world who can play a classical stringed instrument with his feet. From there, he taught himself piano, electric bass, and, of course, guitar.

Back in February 2012, George won the Virginia talent show, Richmond’s Got Talent, near his hometown of Ashland, VA. His popularity exploded when he posted a video of himself covering “Iris” by the Goo Goo Dolls. “It just blew up,” Dennehy said. “It went crazy, it went viral. It went from a few hundred views to a few hundred-thousand views.” George has certainly earned every single one of those YouTube hits. When talking about learning to play guitar, George said, “There was definitely a lot of trial and error about which way I should play, but they way I play now feels natural for me. 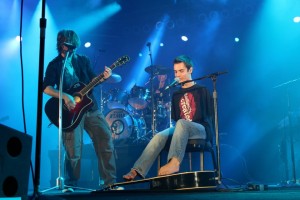 Thanks to his outstanding cover of “Iris”, the Goo Goo Dolls reached out to George and asked them to open for him at Musikfest in Bethlehem, PA, one of the largest and most historic annual music festivals in the country. “Tonight is going to be the most important night of my life so far,” Dennehy stated. “This is beyond anything I ever imagined.”

Dennehy’s influences vary from mainstream acts like Goo Goo Dolls, Lifehouse, and Switchfoot to fellow YouTube standouts like Boyce Avenue and Tyler Ward. George is also very passionate about his Christian faith, and looks up to many Christian artists like Chris Tomlin and David Crowder. When I asked him who he’d most like to perform with (besides the Goo Goo Dolls), he stated Switchfoot, Boyce Avenue, and Chris Tomlin as his Top 3.

Later that evening, after opening for the Goo Goo Dolls with a great set, George was invited back on-stage to perform “Iris” with his icons. At one point, GGD frontman John Rzeznik handed over the vocal reins, and George sang the chorus. It was a defining moment for George in his career, and a truly historic moment in music history. This is only the beginning for George Dennehy. George is currently putting the finishing touches on a cover EP, and has plans to travel to Nashville, TN to work with songwriters on an original song, and shoot a documentary about the process. So much more to come from this young man. The Goo Goo Dolls breakout album was called A Boy Named Goo. Well, this is the story of a boy named George – and there is so much more to be written. – by Matt Bishop

For more, please check out: 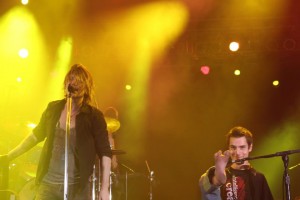 Welcome to the Revival of rock 'n' roll music. The way you used to hear rock, see rock, and feel rock is going to be shattered into a million pieces, reassembled, and revived. Dive into the realm of rock with interviews, concert coverage, and breaking news that make the music seem real again - in your ears, in your mind, and right in front of your very eyes. You'll feel the cool steel of the guitar strings and the smooth wood grain of the drum sticks right in your hands, all with the echoes of reverb in your head. This is the way rock was supposed to be experienced. Welcome to the Revival of rock 'n' roll music.
View all posts by Matt Bishop →
Tagged  George Dennehy, Goo Goo Dolls, Musikfest 2012.
Bookmark the permalink.