Home » Features » ALL LIT UP WITH JOSH TODD OF BUCKCHERRY

ALL LIT UP WITH JOSH TODD OF BUCKCHERRY 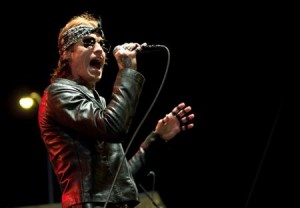 Rock ‘n’ roll excess has long been exemplified by the likes of the Rolling Stones, Aerosmith, Poison, Mötley Crüe, and Guns N’ Roses. Carrying on the tradition for our generation is none other than Buckcherry. I caught up with frontman Josh Todd at their fall tour stop in Philadelphia, PA at Xfinity Live!. This show in particular was a free concert for the fans. “We like to be flexible and go with the flow of what the economy is doing,” Todd stated.

Buckcherry has been touring relentlessly for the past two years on their fifth album, but a new one is on it’s way. The band completed work back in April on their upcoming sixth record, Confessions, which is due out in February 2013. “It’s our first concept record, and we’re really excited about it,” Todd said. “This was the natural flow for us; it was how we wanted to express ourselves in our career at this time.” This will be a much deeper Buckcherry record than their previous outings, but it’s a chance of pace that fans should definitely look to embrace. “It was challenging for us, it’s definitely a different record for us and we’re just growing as artists,” Josh added. In addition to the record being a concept album, it will be accompanied by a short film that ties into the album’s themes.

Buckcherry formed in 1997 and released their self-titled debut album in 1999. The album hit #1 on the Billboard Heatseekers 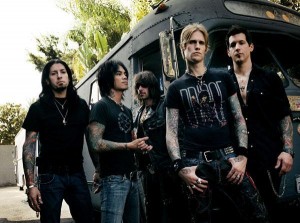 Chart, and #74 on the Billboard Top 200. It would eventually be certified Gold by the RIAA. The record’s lead single, “Lit Up”, was the band’s first #1 hit, and was later ranked at #98 on VH1‘s 100 Greatest Hard Rock Songs. Buckcherry supported the album by touring with Lenny Kravitz, and taking part in the epic anniversary festival Woodstock ’99. After surviving that show, the band went on to tour with their heroes, AC/DC. After two years of hard touring, Buckcherry entered the studio again and released their sophomore effort, Time Bomb, in 2001. It spawned the hit single, “Ridin'”, and several other fan favorites.

After a 3-year hiatus, the band reformed in 2005 and released 15 in 2006. It produced 5 hit singles, including “Crazy Bitch”, which was nominated for the Grammy Award for Best Hard Rock Performance.  The band toured that summer on Crüe Fest with Mötley Crüe, Papa Roach, SIXX:A.M., and Trapt. The next few years would see Buckcherry enjoy their biggest commercial success ever, with 2008’s Black Butterfly and 2010’s All Night Long debuting at #8 and #10 respectively on the Billboard Top 200. On these album cycles, the band toured with the likes of KISS, Limp Bizkit, Hellyeah, and All That Remains. The band had featured slots at Rocklahoma in 2010 and 2012. Currently on a fall/winter tour, the band has recently completed work on it’s upcoming sixth album, Confessions, which is due out in 2013. – by Matt Bishop

Welcome to the Revival of rock 'n' roll music. The way you used to hear rock, see rock, and feel rock is going to be shattered into a million pieces, reassembled, and revived. Dive into the realm of rock with interviews, concert coverage, and breaking news that make the music seem real again - in your ears, in your mind, and right in front of your very eyes. You'll feel the cool steel of the guitar strings and the smooth wood grain of the drum sticks right in your hands, all with the echoes of reverb in your head. This is the way rock was supposed to be experienced. Welcome to the Revival of rock 'n' roll music.
View all posts by Matt Bishop →
Tagged  Buckcherry, Josh Todd.
Bookmark the permalink.