The Rolling Stones have been officially confirmed to play the 12.12.12 Hurricane Sandy Benefit Concert at Madison Square Garden in New York City. The addition of  The Stones has been rumored for some time now but has finally come to fruition. It seemed only perfect, since The Stones are playing the Izod Center in Jersey City, NJ the very next day as part of their 50th anniversary kick-off. The already stacked bill includes The Who, Bruce Springsteen & The E-Street Band, Billy Joel, Paul McCartney (The Beatles), Eric Clapton, Roger Waters (Pink Floyd), Bon Jovi, Dave Grohl (Foo Fighters), Eddie Vedder (Pearl Jam), Chris Martin (Coldplay), and more. The concert is being organized by the same collective group that set up the Concert for New York City after September 11th: John Sykes, President of Clear Channel Entertainment Enterprises; Harvey Weinstein, co-chairman of the Weinstein Company and James Dolan, Executive Chairman of the Madison Square Garden Company.

While the roster is full of many long-time rock legends, they are by no means dusting off their instruments and coming out of retirement for this. The Who are currently in the midst of their 2012-2013 Quadrophenia and More North American Tour. Bruce Springsteen, fresh off a long tour, was just nominated for three Grammy Awards – Best Rock Performance and Best Rock Song (“We Take Care of Our Own”), and Best Rock Album (Wrecking Ball). Roger Waters spent this past summer touring, performing his The Wall – Live show, which he went global with for 2012. Bon Jovi is currently gearing up for their 2013 Because We Can Tour, which kicks off in February. The Rolling Stones performed their first two shows of their 2012-2013 50 & Counting Anniversary Tour at the London 02 Arena in England. After the 12.12.12 Concert, the legends drive a little ways south for two nights, December 13 and 15, at the Prudential Center in Newark, NJ. – by Matt Bishop 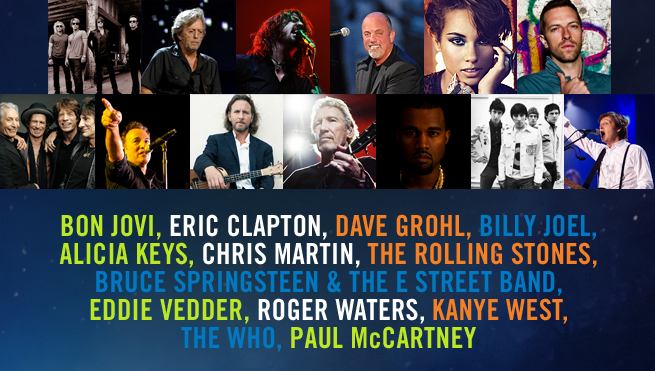 ReverbNation Artist of The Week - Love and a .38