Home » ReverbNation Artist of The Week – Love and a .38

ReverbNation Artist of The Week – Love and a .38 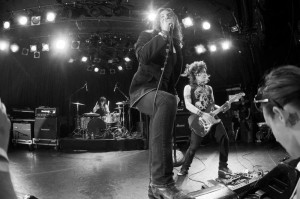 The Rock Revival and ReverbNation have partnered up to bring you fresh rising rockers every week with the ReverbNation Artist of The Week! This week’s (and first ever) Artist of The Week is Love and a .38 from the mecca of hard rock music, Los Angeles, CA. The band states that they are “not to be trusted”. I agree. These rock ‘n’ rollers are up to no good, and I dig it. The band has a straight-head hard rock sound that’s both retro and re-inventive. Songs like “Rock ‘N’ Lola” are Aerosmithesques party-rockers, while “Letter For The Devil” has an epic and dangerous feeling to it.

The band has gained the watchful eye of the music business over the last two years or so. Music Connection Magazine recently called them one of the ‘Hot 100 Bands of The Year”. The world famous Roxy Theatre called them one of their “Top 20 Acts of The Year. The band’s first LP was released independently, and was produced by Ian MacGregor (The All American Rejects, The Ataris, Miranda Cosgrove). Songs from the record have amassed almost 1 million plays through various music streaming outlets, and has sold over of 20,000 worldwide. The band released its first music video to their single, “Rock N Lola”, which gained over 35,000 views in only a few months, as well as a spot on regular rotation at Hard Rock Cafe‘s everywhere. Singles from the self-titled album can be heard in various films, NASCAR, and is currently on regular rotation at numerous terrestrial, satellite, and internet radio stations. If you haven’t heard these guys yet, trust me…you’re gonna.

Love and a .38 has shared the stage with a wide range of bands from a number of different genres, including Mötley Crüe, Tom Morello (Rage 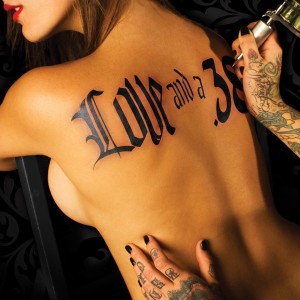 Against The Machine/Audioslave/Street Sweeper Social Club), Slash (Guns N’ Roses/Velvet Revolver), Matt and Kim, Black Veil Brides, Camp Freddy, and many more. In 2012, the band played a series of exclusive showcases at South By SouthWest (SXSW) in Austin,TX, embarked on two headlining West Coast tours, and landed a featured spot at The Sunset Strip Music Festival (SSMF) alongside Marilyn Manson, The Offspring, Bad Religion and many more. Love and .38 are planning on releasing a lot of of material in 2013, and hitting the road for a long tour to support it. I can’t decided what I want for Christmas more: Love and a .38 to support a national act on tour, or for them to head out on a headlining tour across the country. Either way, it would be awesome. Shout-out to the band – if you guys ever make it to Philly, I’m booking The TLA and we’re gonna throw one hell of a party! There’s a lot to look forward to from these guys, and the rock world should be psyched about it. I know I am. CRANK IT UP! – by Matt Bishop (Photos Courtesy of Love and a .38 and ReverbNation)