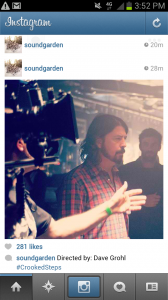 Soundgarden are shooting the music video for the single, “By Crooked Steps” today. The band has tapped the one and only Dave Grohl (Foo Fighters, Queens of The Stone Age) to direct. The photo on the left is the first shot of Dave behind the camera on today’s video shoot. Soundgarden is in capable hands with this one, as Grohl is no stranger to the director’s chair. For the last year, in addition to touring, he has been working on a documentary about Sound City Studios, the legendary studio on the outskirts of Los Angeles where many classic albums have been recorded artists like Neil Young, Tom Petty, Fleetwood Mac, and…Nirvana. The film marks Grohl’s directorial debut, and will be accompanied by a soundtrack.

“By Crooked Steps” is the latest single from Soundgarden’s new album, King Animal, the band’s first studio LP in 16 years. The album debuted at #5 on the Billboard Top 200, and sold over 83,000 copies in it’s first week of sales. This past spring, 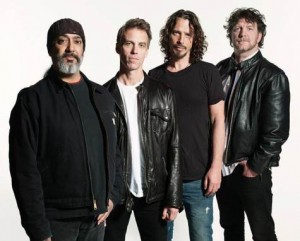 Soundgarden contributed a new single, “Live To Rise”, to the soundtrack of the blockbuster film The Avengers. The new record’s first single, “Been Way Too Long”, dropped on September 27. The band embarked on a very special 3-date North American Theater Tour (beginning at New York’s Irving Plaza) that saw the band playing three intimate venues across the continent. New York, Los Angeles, and Toronto were be treated to the performances. A day prior, Soundgarden played a special Live on Letterman show, which I attended. The video above is the performance of “By Crooked Steps”.

Grohl is also keeping busy during the Foo Fighters hiatus by drumming for Queens of The Stone Age on their upcoming sixth studio LP. The album is the long-awaited follow-up to 2007’s Era Vulgaris, on which Grohl did not play. Along with 2000’s Rated R, the band’s 2002 masterpiece Songs For The Deaf is one of the best albums of the decade, and the last time Grohl played with the band. – by Matt Bishop (Photo Courtesy of Soundgarden)

Welcome to the Revival of rock 'n' roll music. The way you used to hear rock, see rock, and feel rock is going to be shattered into a million pieces, reassembled, and revived. Dive into the realm of rock with interviews, concert coverage, and breaking news that make the music seem real again - in your ears, in your mind, and right in front of your very eyes. You'll feel the cool steel of the guitar strings and the smooth wood grain of the drum sticks right in your hands, all with the echoes of reverb in your head. This is the way rock was supposed to be experienced. Welcome to the Revival of rock 'n' roll music.
View all posts by Matt Bishop →
Tagged  Dave Grohl, Soundgarden.
Bookmark the permalink.