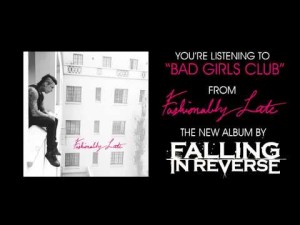 Modern heavy rockers Falling In Reverse have released a new music video for the song “Bad Girls Club”, the third single off their latest album, Fashionably Late, which debuted at #17 on the Billboard Top 200 back in July via  Epitaph Records. The video was directed by Zach Merck, who has also worked with the band on their videos for  “The Drug In Me Is You”, “Good Girls, Bad Guys”, and “I’m Not A Vampire”. A cool cameo is made in the video by Andy Biersack of Black Veil Brides. The band recently announced a landmark tour with Escape The Fate in early 2014 with support from Chelsea Grin and Survive This!. Falling In Reverse are currently in the midst of their intimate acoustic tour, An Evening with Falling In Reverse – Unplugged & Unsensored, which continues tonight at the Gramercy Theatre in New York City. The tour wraps up this weekend Chicago, IL on November 10.

Falling In Reverse exploded onto the scene in 2011 with the release of their debut smash hit, The Drug In Me Is You, via 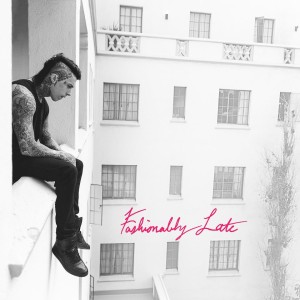 Epitaph Records. The disc hit #19 on the Billboard Top 200 and sold over 18,000 copies in it’s first week of sales. A huge success, the album produced four hit singles. That same year, the band played their first-ever live shows on the Vans Warped Tour. The band toured relentlessly for the next two years with the likes of Black Veil Brides, We Came As Romans, Eyes Set To Kill, and more. They also appeared at Rock On The Range in May 2012. In June 2013, they released their sophomore effort, Fashionably Late. The album debuted at #17 on the Billboard Top 200. To support the record, the band embarked on the Vans Warped Tour once again in the summer of 2013. So far, the band has released two singles from the album – “Alone”, “Fashionably Late”, and now, “Bad Girls Club”. Falling In Reverse are currently on the road playing intimate acoustic shows as part of their An Evening with Falling In Reverse – Unplugged and Uncensored Tour. The run ends on November 10 in Chicago, IL. The band is set to embark on a massive North American headlining run with Escape The Fate and special guests Chelsea Grin and Survive This! in the new year. – by Matt Bishop