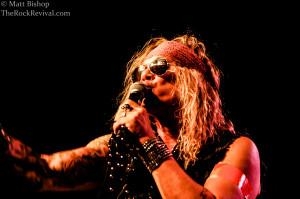 Balls out. That’s how Steel Panther rolls. For the band, it’s not just a phrase. It’s not just an album title. It’s a way of life. A code of conduct. I recently caught up with frontman Michael Starr and bassist Lexxi Foxxx backstage in Philadelphia, PA. After touring with Mötley Crüe back in the spring in Europe, Steel Panther have brought the fire back to the States for their headlining 2012 Balls Out Tour.

After the guys hooked me up with a warm beer, we got down to business and talked 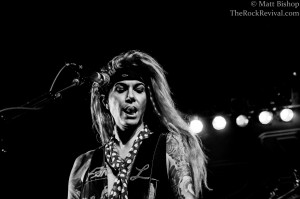 about their latest record, Balls Out. “Balls Out is a great record, and it’s been soaring down the charts,” said Starr. Foxxx added, “We did really well on Billboard the first week, and then people just started using their computers to download it.” Starr went on to say, “Why pay for music when you can get it for free? If I could get drugs for free, I totally would. And heavy metal is like a drug, so wherever it is, I want it!” 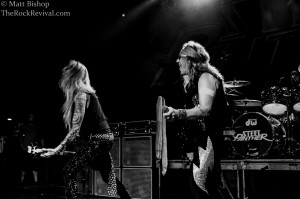 We went on to discuss the band’s young but epic career, and they’re impending induction into the Rock and Roll Hall of Fame. In regards to The Hall’s eligibility rule (an artist is eligible for induction 25 years after the release of their first album), Starr said “I think we could just stop right now, not put out another record, and we’d be in the Rock and Roll Hall of Fame.”

Steel Panther exploded onto the metal scene in 2009 with their debut album, Feel The Steel, which debuted at #98 on the Billboard Top 200 in 2009. Their sophomore effort, Balls Out, followed in 2011. The album debuted at #40 on the Billboard Top 200. The band is still on their headlining Balls Out World Tour, which will take the band around the world through November. Get your tickets, and get ready to go balls out. – by Matt Bishop

Welcome to the Revival of rock 'n' roll music. The way you used to hear rock, see rock, and feel rock is going to be shattered into a million pieces, reassembled, and revived. Dive into the realm of rock with interviews, concert coverage, and breaking news that make the music seem real again - in your ears, in your mind, and right in front of your very eyes. You'll feel the cool steel of the guitar strings and the smooth wood grain of the drum sticks right in your hands, all with the echoes of reverb in your head. This is the way rock was supposed to be experienced. Welcome to the Revival of rock 'n' roll music.
View all posts by Matt Bishop →
Tagged  Balls Out Tour, Lexxi Foxxx, Michael Starr, Steel Panther, steel panther 2012, steel panther interview, steel panther michael starr lexxi foxxx interview, steel panther news, The Rock Revival, TheRockRevival.com.
Bookmark the permalink.