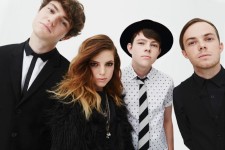 Echosmith have premiered the official music video for their new single “Bright”. The track is the third single off the band’s major-label debut Talking Dreams which came out in 2013 via Warner Bros Records. The disc hit #1 on the Billboard Heatseekers Chart and #48 on the Top Rock Albums Chart. The album’s lead single “Cool… Continue reading