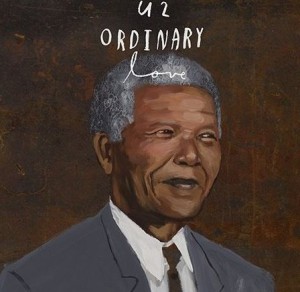 Rock icons U2 have premiered a lyric video for their first new song in three years, “Ordinary Love”. The band wrote the song as a tribute to Nelson Mandela, former President of South Africa and world peace revolutionary. The track will be featured on the soundtrack of the upcoming biopic, Mandela: Long Walk to Freedom. The beautiful lyric video was created and directed by Oliver Jeffers and Mac Premo. Oliver, an Irish artist, also designed the cover for the single. U2 will be releasing the song on 10-inch vinyl on November 29 for Record Store Day’s Back to Black Friday, accompanied by a revamped version of “Breathe”, a track off the band’s last album, 2009’s No Line On The Horizon. The album debuted at #1 on the Billboard Top 200, and #1 on nearly every other chart around the globe. U2 have reportedly enlisted renowned producer Danger Mouse to produce their next album, which is due out in April 2014. It will be the band’s first full-length LP in five years. – by Matt Bishop

Welcome to the Revival of rock 'n' roll music. The way you used to hear rock, see rock, and feel rock is going to be shattered into a million pieces, reassembled, and revived. Dive into the realm of rock with interviews, concert coverage, and breaking news that make the music seem real again - in your ears, in your mind, and right in front of your very eyes. You'll feel the cool steel of the guitar strings and the smooth wood grain of the drum sticks right in your hands, all with the echoes of reverb in your head. This is the way rock was supposed to be experienced. Welcome to the Revival of rock 'n' roll music.
View all posts by Matt Bishop →
Tagged  Danger Mouse, Mandela Long Walk to Freedom, Nelson Mandela movie, Ordinary Love 10-inch vinyl, Ordinary Love lyric video, Ordinary Love premiere, The Rock Revival, TheRockRevival.com, U2 2013, U2 Nelson Mandela, U2 new album 2014, U2 new song, U2 news, U2 Ordinary Love video.
Bookmark the permalink.