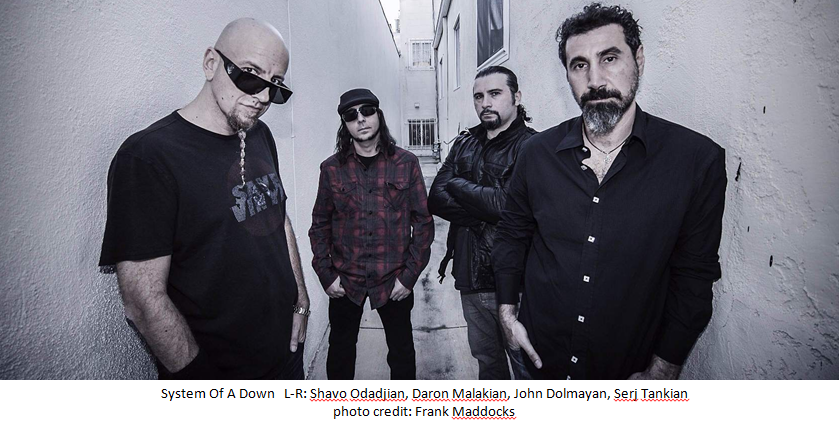 (TRR) – Grammy-winning alt metal outfit System Of A Down have announced their first U.S. shows in three years. The string of dates kicks off on October 13 at the Glen Helen Amphitheater in San Bernardino, CA. The band are set to headline the Monster Energy Aftershock Festival in Sacramento, CA on October 14. System Of A Down’s last U.S. show was at The Forum in Los Angeles during 2015’s Wake Up The Souls Tour. Ticket information is available HERE.

Since their debut in 1998, System Of A Down have released five studio albums with three No. 1 debuts on the Billboard Top 200. To date, the band has sold over 31 million copies worldwide. They’ve written and recorded seven Top 10 radio hits, two of which were chart-topping No. 1’s (2002’s “Aerials” and 2005’s “Hypnotize”).

In 2005, System Of A Down released both Mezmerize and Hypnotize in two installments as a dual album in a single year. Each debuted at No. 1 on the Billboard Top 200 and on charts around the world, achieving the rare feat of having two No. 1 albums in the same calendar year. “B.Y.O.B.” (Bring Your Own Bombs) was the first single released from Mezmerize and earned the band a Grammy for Best Hard Rock Performance.