Home » Soundgarden are ‘King’ once again on 2013 North American Tour

Soundgarden are ‘King’ once again on 2013 North American Tour 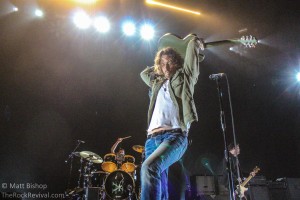 Soundgarden are once again at the top of their game, and the top of the music world. Since they resurfaced sparingly in 2011, the band has been on quite a run in the last year. After being on a lengthy hiatus since 1997, it came into question whether or not Soundgarden would ever play again. In 2010, fans’ prayers were answered as the band reunited, issued a greatest hits collection with a previously unreleased track, and went on a brief tour run. In 2012, however, Soundgarden cranked it up. They laid down a new single, “Live To Rise”, for the soundtrack of the The Avengers film in the spring, and co-headlined Download Festival in England alongside Black Sabbath, Metallica, The Prodigy, Megadeth, and Biffy Clyro. In November, the wait was finally over. The long-overdue new Soundgarden LP, King Animal, was released. The night before the album came out, I had the privilege of catching an intimate Soundgarden performance on Live on Letterman in New York City. They debuted much of the new record, and sprinkled in a hit or two.

Recently at The MAC Center in West Long Branch, NJ, it was time for the big show. All the pieces were there – packed arena and a full 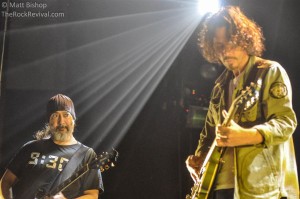 setlist, and huge signature Soundgarden concert posters for sale at the merch booth (which, sadly, is a dying artform). With no opening act, the band had to set the tone right away. They simply walked on stage and ripped right into “Let Me Drown”, which is arguably my favorite Soundgarden song. And, let me tell you…it’s very difficult to concentrate on shooting photos of a band when their blasting one of your favorite songs of there’s.

Before the show started, I was standing in the photo pit and I noticed a kid in the very front row with a big sign that read “CHRIS, LET ME PLAY YOUR GUITAR FOR SPOONMAN’. Sure enough, the sign caught Chris Cornell‘s eye, and he said, “Hey man, you can play? Well, let’s go.” The fan jumped on stage, and Chris handed the kid his sweet Gibson ES-335. The main riff proved to be no problem for the young man, however when the bridges and solo came, he simply pointed to Kim Thayil, and watched the master do work. 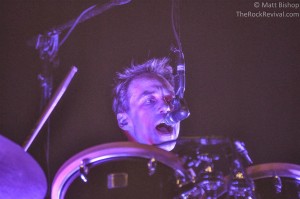 The rest of the show was everything Soundgarden fans could have hoped for. Being seasoned veterans in the rock game, they struck a perfect balance between playing their greatest hits and showcasing the new album. The crowd was certainly fed their fill, as the band played a meaty 20 song set, with a 4 song encore. It was a testament to why they’re tour has been such a success, and why they’ve been headlining some of the biggest festival in the U.S. and Europe over the last year.

Soundgarden exploded unto the mainstream with the release of their third album, 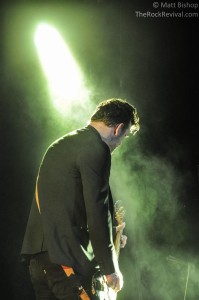 1991’s Badmotorfinger. The follow-up, 1994’s Superunknown, catapulted the band to legendary status. Debuting at #1 on the Billboard Top 200, the album has since been certified 5x platinum by the RIAA. The record earned the band two Grammy Awards in 1995, and today it still serves as a blueprint for heavy alternative rock music. Soundgarden disbanded in 1997 following the release of their 1996 effort, Down On The Upside. In 2010, the band reunited and issued their first greatest hits collection, Telephantasm. The album featured the previously unreleased single, “Black Rain”.

In March 2011, the band released the live album, Live on I-5. The summer of 2011 saw the band embark on a sold-out summer tour, culminating with a headlining appearance at Voodoo Experience in New Orleans, LA. This past spring, Soundgarden contributed a new single, “Live To Rise”, to the soundtrack of the blockbuster film The Avengers. This past summer, the band were a featured act at England’s epic Download Festival alongside Black Sabbath, Metallica, The Prodigy, Megadeth, and Biffy Clyro. The band’s first studio LP in 16 years, King Animal, came out on November 13, 2012. The album debuted at #5 on the Billboard Top 200, and sold over 83,000 copies in it’s first week of sales. Soundgarden fell on some black days, but with this new album and tour, their imminent future is a bright one. – by Matt Bishop (Photography by Matt Bishop) 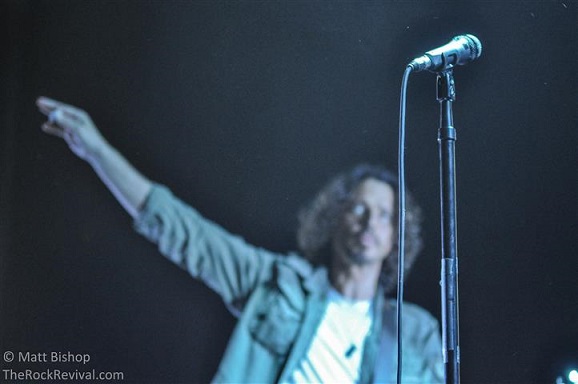