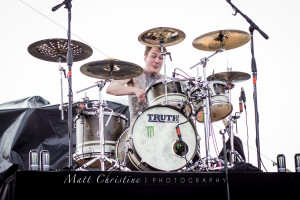 Over the last 5 years, heavy metal has seen the surge of a new generation of bands. Bands like Avenged Sevenfold, Trivium, Killswitch Engage, Bullet For My Valentine, Machine Head, The Devil Wears Prada, Lamb of God, and of course, Asking Alexandria, are ushering in a whole new era of heavy metal and thrash. Asking Alexandria are certainly at the forefront of this movement, after the success of their breakthrough second LP. The band has toured relentlessly (no pun intended) over the last three years, including world headlining tours, and a main stage run on Mayhem Festival last summer. I recently caught up with drummer James Cassells backstage at Carolina Rebellion 2013 after the band’s set to talk about the day, their upcoming record, tour plans, and more.

The band is in the midst of their Don’t Pray For Us Tour, and made several stops on the U.S. festival circuit. When I asked about the 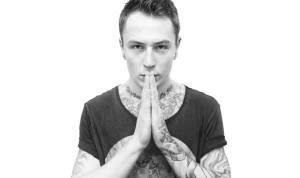 band’s set, James stated, “It was absolutely fucking amazing, man. Today was so good.” Of course, I always ask the European bands if the festival scene in The States is catching up to the legendary European rock culture. Interestingly enough, James said it’s not so much the size difference, as it is the vibe. “It’s a whole different vibe out here. It’s very radio infused, which is awesome. It’s all the tunes you love and you wanna hear and sing along to.”

Asking Alexandria formed in 2008 in in the UK. Throughout 2008 and some of 2009, the band toured hard to spread their music to the masses. In May 2009, the band journeyed to Connersville, IN to record their debut album, Stand Up and Scream, at The Foundation Recording Studios. Shortly after the recording process concluded, the band signed with Sumerian Records and released the LP on September 15, 2009. They spent the rest of the year touring the states. 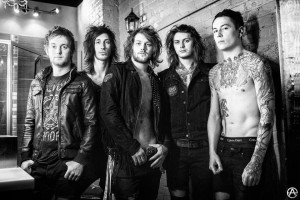 Throughout 2010, AA toured North America and Europe hard with the likes of Attack Attack!, Breathe Carolina, Dance Gavin Dance, We Came As Romans, Born of Osiris, and more. The band also appeared at Bamboozle Festival in New Jersey. In April 2011, the band releasd their sophomore effort, Reckless & Relentless, which hit #9 on the Billboard Top 200. Thanks to three hit singles – “Closure”, “To The Stage”, and “Dear Insanity” – the album quickly went double-platinum. On November 17, 2011, AA opened for the legendary Guns N’ Roses at the Izod Center in East Rutherford, NJ. In November 2012, the band released a covers album, Under The Influence: A Tribute to the Legends of Hard Rock, and over the winter they headlined the Monster Energy Drink Outbreak Tour. AA have a new single out, “The Death of Me”, which they’ve been playing live and their new album, From Death to Destiny, is due out on August 6 (pushed back a bit from the initial late July release time). The band has plenty of touring coming up, including the European festival circuit, South America, and eventually back to the UK and US. In closing, James’ thoughts on the new record? “By no means is it going to be a lighter album. You haven’t seen the heaviest yet. The heaviest yet is still to come.” – by Matt Bishop (Top Left Photo by Matt Christine, Middle Right Photo by Adam Elmakias)

Soundgarden are 'King' once again on 2013 North American Tour