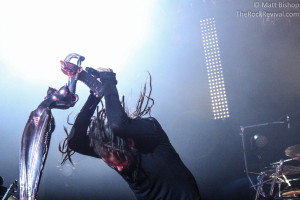 Few bands have remained a force to be reckoned with throughout their entire career like Korn. Since their revolutionary arrival in 1994, the band has maintained mass appeal, critical acclaim, and success on the charts. Ground-breaking and heavy as hell, Korn continue their journey down the Path of Totality in 2013. Their last album, The Path of Totality, was released in December 2011. Since then, the band has been touring relentlessly, including playing several major festivals. During that time, they were writing as well, and have just confirmed a September 24 release date for their upcoming  11th studio album.

Recently, the Path of Totality ran it’s course through the Sands Event Center in 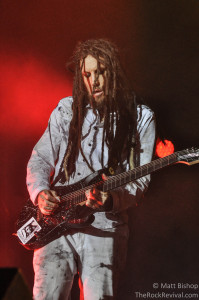 Bethlehem, PA. This leg of the tour has been extra special, as fans are witnessing the return of guitarist Brian “Head” Welch. Head left the band in 2005 to cope with his addictions and immerse himself in his new-found faith. Korn and Head found themselves together at Carolina Rebellion 2012 a little over a year ago. Korn was co-headlining the festival, and Head was performing with his new project, Love and Death. I remember seeing them all talking backstage. It was a bit surreal, and it gave me the chills. The buzz about a possible collaboration that night quickly began to build. Sure enough, all those in attendance bared witness to the rebirth of Korn, and perhaps their most significant version of “Blind” they’ve ever performed. 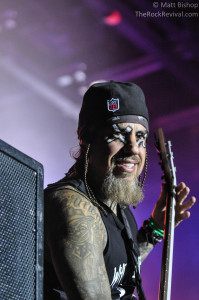 With Head back in the line-up and drummer Ray Luzier  fully in the fold, Korn seems to have a surge of new energy on stage. When Munky was playing with out head, it felt as though something was missing. Like only one amp was plugged in (both literally and figuratively). This time around, with guitarists on both sides of the stage, the band came out swingin’. Korn opened with “Blind”, the very song that re-launched the band back in North Carolina  year ago. From their, it was an equal barrage of hits and rarities. The band played songs off 8 of their 10 studio albums, as well as their epic cover of Pink Floyd‘s “Another Brick In The Wall”, which has become a live staple for the band as of late. Mosh pits where in full-effect; fans crowd-surfed and even blood was spilled. But, it was all in the spirit of metal, which is apparently still alive and moshing thanks to legends like Korn.

In 1994, Korn released their self-titled debut album, revolutionizing metal and music as whole. They 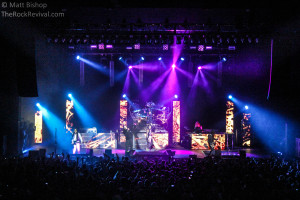 created a whole new sub-genre, “nu-metal”, that fused traditional heavy metal with elements of alternative rock, grunge, and hip-hop. In the following decade, Korn would rule the airwaves. Topping the Billboard charts, garnering massive radio play, and consistently owning the #1 spot on MTV’s TRL, Korn became the biggest band in the world. The band has sold over 35 million records world-wide. The band has released ten studio albums, 8 of which have gone Top 10 on the Billboard Top 200 (five of them hit the Top 5). Eight of their albums have gone multi-platinum. They have been nominated for 7 Grammy’s, winning two of them, and 11 MTV Video Music Awards, winning 2 of them. Korn hit their peak when they released back-to-back masterpieces: 1998′s Follow The Leader and 1999′s Issues. Both albums hit #1 on the Billboard Top 200. Their last album, 2010′s Korn III: Remember Who You Are, hit #2. Korn are back near top of the music game with The Path of Totality, which hit #10 in Billboard in 2011. The band has announced that their untitled new album will be released on September 24. – by Matt Bishop

Avenged Sevenfold announce new album, 'Hail To The King', due out on August 27