It was a rock star-studded night at the 2012 MTV Movie Awards as Steven Tyler and Joe Perry of Aerosmith presented actor Johnny Depp with the MTV Generation Award. Perry and Tyler praised Depp for taking on so many diverse and challenging roles, and bringing to life so many memorable characters throughout his career. To celebrate the honor, Johnny Depp joined The Black Keys on-stage for a special performance of “Gold On The Ceiling.” Tyler and Perry then presented Depp with MTV’s coveted Popcorn Trophy, and Depp gave a short speech, thanking MTV and the fans for “quite an amazing honor.” Then, Depp set the Popcorn aside, and he and the Keys ripped right into “Lonely Boy.” 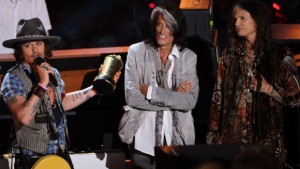 Depp is not stranger to rock ‘n’ roll. Before even thinking about becoming an actor, Depp dropped out of high school and moved to Los Angeles to pursue a career as a musician. He eventually became the frontman of the band The Kids, who once opened a show for Iggy Pop. Most recently back in April, Depp joined Marilyn Manson on-stage at the 2012 Revolver Golden God Awards for renditions of “Sweet Dreams” and “Beautiful People.”

The Black Keys have been monsters of rock in the last three years. Their 2010 album, Brothers, was certified platinum and garnered the band three Grammy Awards. The band is currently touring on their 2011 follow-up, El Camino, which hit #2 on the Billboard Top 200. The band will be co-headlining Firefly Music Festival with The Killers and Jack White in Dover, DE at the end of July.

Aerosmith are one of the greatest bands of all time. Frontman Steven Tyler and lead guitarist Joe Perry have been keeping busy on their own lately. Last month, Perry wrote two instrumental tracks that were featured in the episode “Dune and Gloom” of the hit television show CSI. Tyler has also been busy on television, taking a judging spot on Fox’s long-running hit American Idol. Now, Aerosmith as a whole are back in the saddle. The band’s new studio album, Music From Another Dimension, is due out on August 28th. The band premiered the record’s first single, “Legendary Child,” on May 24, and it’s currently dominating rock radio. Aerosmith is embarking on the 2012 U.S. Global Warning Tour from June 16-August 8 with special guest Cheap Trick. – by Matt Bishop (Photos Courtesy of Getty Images)

SITTING DOWN WITH THE INDUSTRIALIST - A CONVERSATION WITH BURTON C. BELL OF FEAR FACTORY