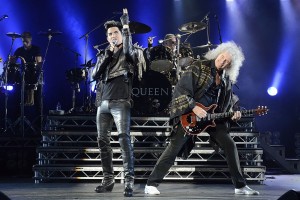 Classic rock legends Queen have announced that they will be hitting the road this summer for a North American tour with vocalist Adam Lambert. Lambert will be joining guitarist Brian May and drummer Roger Taylor, filling the shoes of Freddie Mercury, who passed away in 1991. “Queen is one of the quintessential rock bands of all time. They’ve influenced bands for years to come,” Lambert stated today on Good Morning America. “To be able to bring these songs to life on stage with rock royalty members is a dream come true.” Lambert first performed with Queen in 2009 on the season finale of American Idol, rocking out a version of “We Are The Champions”. Since then, Lambert has accompanied the band at the MTV European Music Awards in Belfast, Ireland in 2011, three sold-out shows at the Hammersmith Apollo in London, as well as one-off shows across Europe, Russia, Ukraine, and Poland. From 2004-2009, Bad Company front man Paul Rogers toured with the band extensively as Queen + Paul Rodgers. 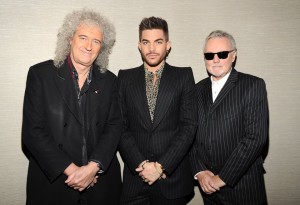 for the tour. Deacon last performed with Queen in 1997, and he did not join the band for their Rock and Roll Hall of Fame induction in 2001, the Queen + Paul Rogers Tour, or the band’s performance at the closing ceremonies of the Olympics in London during the summer of 2012. Adam Lambert as released his debut album, For Your Entertainment, in 2009. The disc debuted at #3 on the Billboard Top 200, and sold over 198,000 copies in it’s first week. The follow-up, 2012’s Trespassing, debuted at #1 on the Billboard Top 200. Queen are one of the greatest bands in music history. To date, they have sold over 300 million albums worldwide and were inducted into the Rock and Roll Hall of Fame in 2001. Queen were inducted into the Songwriters Hall of Fame in 2002 and the UK Music Hall of Fame in 2003. Throughout their illustrious career, the band has released 18 #1 albums. – by Matt Bishop (Top Left Photo Courtesy of George Chin/WENN)

FIRST CLIP OF OUTKAST'S ANDRE BENJAMIN AS JIMI HENDRIX IN UPCOMING BIOPIC, 'ALL IS BY MY SIDE'