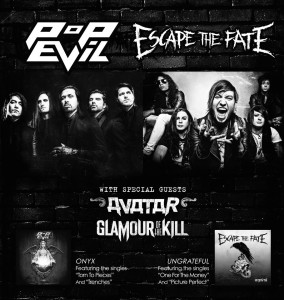 Pop Evil and Escape The Fate will be joining forces for a spring co-headlining tour across the U.S. with special guests Avatar and Glamour of The Kill. The trek kicks off on April 30 at Pops in St. Louis, MO and wraps up on May 28 at Summit Music Hall in Denver, CO. Pop Evil and Escape The Fate are both touring off their 2013 albums which were huge successes for both bands. Escape The Fate recently wrapped up the Bury The Hatchet Tour with Falling In Reverse. Pop Evil kicked off 2013 with a U.S. run supporting Stone Sour, and now the band is on tour in Europe with Five Finger Death Punch. Avatar are currently putting the finishing touches on their fifth studio album, Hail The Apocalypse, which is due out on May 13 via eOne Music. Glamour of The Kill are still touring off their 2013 effort, Savages.

Pop Evil broke out with their major-label debut, Lipstick On The Mirror, in 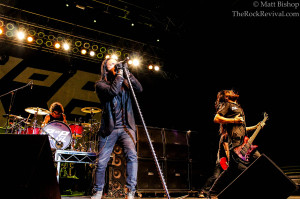 2008. The band worked with Kid Rock producer Al Sutton on the record, and it spawned the hit single “100 in a 55”. The band proceed to tour with Buckcherry, Saliva, Whitesnake, and Judas Priest on their British Steel 30th Anniversary North American Tour. Pop Evil have exploded onto the mainstream with the success of their sophomore effort, War of Angels, which hit #43 on the Billboard Top 200. The disc produced four hit singles. The album’s third single and huge radio hit, “Boss’s Daughter”, was co-written by Mötley Crüe guitarist Mick Mars, and Mars also makes a guest appearance on the track. On this album cycle, the band has toured with the likes of Drowning Pool, Trust Company, Finger Eleven, Escape The Fate, 3 Doors Down, Puddle of Mudd and Theory of a Deadman. Last Summer, the band toured on the Trespass America Festival, then headed to Canada for a run with Black Label Society. The band recently released their third studio album, Onyx, on May 14. The album hit #39 on the Billboard Top 200, and the lead single, “Trenches”, recently gave the band their first #1 Mainstream Rock Radio hit. 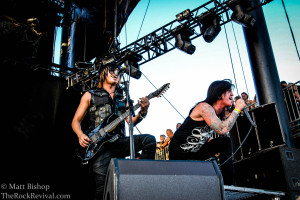 Escape The Fate released their first effort with lead vocalist Craig Mabbitt in 2008, This War Is Ours. The album hit #35 on the Billboard Top 200 and sold over 13,000 copies in it’s first week of sales. The band toured in support of the album with Chiodos and Silverstein. Their 2010 self-titled follow-up debuted at #25 on the Billboard Top 200 and #1 on Billboard Hard Rock Albums. Legendary guitarists Mick Mars of Mötley Crüe and John 5 of Rob Zombie each co-wrote a song on the album. In the summer of 2011, the band toured on the Rockstar Energy Drink Uproar Festival. That fall, the band secured a slot at the 48 Hours Festival in Las Vegas. In 2012, the band toured with Attack Attack! on the This World Is Ours Tour, and that same year they signed with Eleven Seven Music. In 2013, they released their fourth studio LP, Ungrateful, which landed at #27 on the Billboard Top 200. This year, the band has toured with the likes of Papa Roach, Otherwise, Hollywood Undead, and more. The band just wrapped up The Wrong Side of Heaven Tour with Five Finger Death Punch, Miss May I, and Gemini Syndrome. Back in November, Escape The Fate mounted a month-long European run, ending with two Vans Warped Tour Europe dates on November 23 and November 24. – by Matt Bishop

with special guests Avatar and Glamour of The Kill