Of Mice & Men have premiered the official music video for their new single “Broken Generation”. The track is off the reissue of their latest studio effort Restoring Force: Full Circle. The deluxe edition is due out on February 24 via Rise Records and features three brand new tracks – “Broken Generation,” “Something To Hide,” and “Never Giving Up” – as well as an acoustic version of “Feels Like Forever” were recorded this past fall with producer David Bendeth. The band are set to tour on Soundwave Festival in Australia alongside Faith No More, Soundgarden, Slipknot, Incubus, Slash, Judas Priest, Godsmack, Escape The Fate, and many more at the end of the month, with a 19-date European headlining tour to follow this spring. 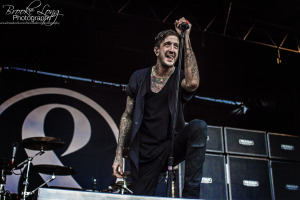 last year, the band mounted a U.S. co-headlining tour with Bring Me The Horizon and were a featured act on Warped Tour this past summer. Of Mice & Men formed in Costa Mesa, CA in 2009. A year later, they released their self-titled debut LP. The album cracked the Billboard Top 200 at #115 and also hit #35 on Billboard Rock and #10 on Billboard Hard Rock. are currently in the studio working on the follow-up to their 2011 effort, The Flood, which debuted at #28 on the Billboard Top 200. The band participated on Warped Tour in the summer of 2011. In January 2012, the band re-released The Flood with four new tracks and that summer, they toured on Warped once again. – by Matt Bishop (Bottom Right Photo Courtesy of Brooke Long)