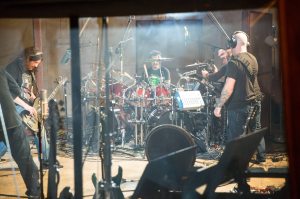 Thrash metal titans Anthrax have released a video update from the studio as they continue to work on their brand new studio album tentatively titled Catch The Throne. The clip features in-studio footage of the band at work, commentary from the guys, as well as a preview of a thrashing guitar riff. The new disc will be the band’s eleventh studio effort. Volbeat and Anthrax have announced a 2015 North American Tour with very special guests Crobot. The trek kicks off at the 1STBANK Center in Denver Colorado on April 25, 2015 and wraps up on May 2, 2015 at the Hammerstein Ballroom in New York City. Additional dates are said to be announced imminently. Tickets go on sale this Friday, October 31 HERE. Volbeat and Anthrax played Slipknot’s Knotfest back in the fall in San Bernardino, CA.

Last February, Anthrax were nominated for the Grammy Award for Best Metal Performance for 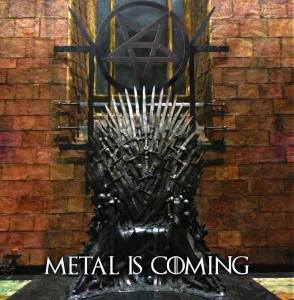 their cover of the AC/DC classic “T.N.T.”. Shortly after on February 22, drummer Charlie Benante was a featured guest on VH1’s That Metal Show. Anthrax have long been titans of thrash metal. Deemed one of the “Big 4″ of thrash metal (along with Metallica, Megadeth, and Slayer), They band has been in the business for nearly 30 years. In the last three years, the Anthrax has played some of the world’s biggest festivals and stages, and released one of their best albums ever. 2011′s Worship Music is the band’s first new album in 8 years, and marks the return on long-time vocalist Joey Belladona. The album debuted at #12 on the Billboard Top 200. The band toured on the Rockstar Energy Drink Mayhem Festival in the summer of 2013 along with Slipknot, Slayer, Motörhead, The Devil Wears Prada, As I Lay Dying, Asking Alexandria, and more. Anthrax were nominated for a Grammy in 2013 for Best Hard Rock/Metal Performance for “I Am Alive” off of Worship Music. – by Matt Bishop