The Soundwave Festival 2015 lineup has been announced, and it’s certainly one for the books. Running from February 21 – March 1 2015, the festival has a great mix of all kinds of rock. The bill boasts Faith No More, Soundgarden, and Slipknot as headliners. Soundgarden is currently on a co-headlining North American tour with Nine Inch Nails, and Slipknot just released their new single “The Negative One” off their upcoming new album. Also included in the lineup are some great names that haven’t been active as of late like Incubus, Ministry, Atreyu, Mayhem, Judas Priest, Marylin Manson, and Godsmack. Judas Priest released their new album Redeemer of Souls back on July 8 and it debuted at #6 on the Billboard Top 200. The band’s U.S. Tour in support of the album kicks off on October 1. Godsmack’s new disc 1000hp just dropped on August 5 and hit the Billboard Top 200 at #3. The band is currently headlining the Rockstar Energy Drink Uproar Festival in the U.S. Other top acts on Soundwave 2015 include Slash, Lamb of God, Of Mice & Men, New Found Glory, Fear Factory, Escape The Fate, Papa Roach, Fall Out Boy, All Time Low, and many more. Some great up-and-comers rounding out the festival are Tonight Alive, Emily’s Army, Patent Pending, The Treatment, This Wild Life, Butcher Babies, The Color Morale, and others. – by Matt Bishop 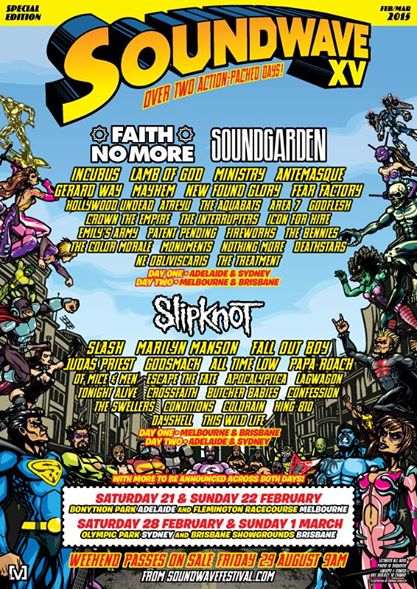