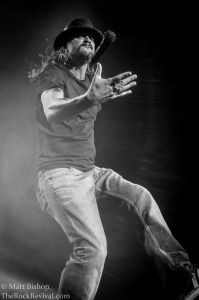 Kid Rock has announced another massive summer tour. The $20 Best Night Ever Tour will be making it’s second run this summer in support of Kid’s new album First Kiss which drops on February 24 via Warner Bros/Top Dog Records. The album was recorded and Kid Rock’s studio in Detroit, MI. Kid Rock also produced the album, collaborating with producer Dann Huff on two tracks. Kid’s last effort Rebel Soul peaked at #5 on the Billboard Top 200. The tour kicks off on June 24 at the Xfinity Theatre in Hartford, CT and will feature a very special guest – classic rock icons Foreigner. Kid Rock Fan Club members are eligible for pre-sale tickets on February 19. If you pre-order the album, you can purchase tickets on February 20. Tickets go on sale to the general public on February 24 via LiveNation.com.

Recently, Kid performed at the Louder Than Life Festival in Louisville, KY alongside Judas 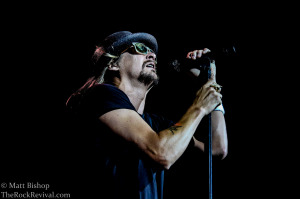 Priest, Korn, Limp Bizkit, Alter Bridge, Five Finger Death Punch, Volbeat, and many more. Kid Rock is wasting no time in planning his new year. A summer tour is expected to be announced imminently. Throughout his career, Kid Rock has sold over 25 million albums in the U.S. alone. His musical stylings have varied from rock, metal, rap, blues, and country, attracting a wide array of fans. Kid exploded into the mainstream with his 1998 release Devil Without a Cause. The album produced six hit singles, and has since been certified 11x platitinum by the RIAA. Over the last decade an a half, Kid has produced some of music’s biggest hit singles including “Bawitaba”, “Cowboy”, “American Bad Ass”, “Picture (feat. Sheryl Crow)”, “All Summer Long”, and many more. Kid Rock has been nominated for five Grammy Awards throughout his career. He’s also garnered two American Music Awards and three Billboard Music Awards. – by Matt Bishop