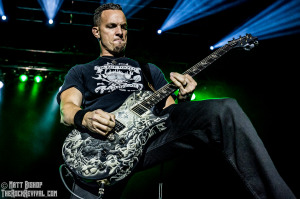 After a tremendously successful worldwide festival run that concluded over the weekend at the Louder Than Life Festival in Louisville, KY, Alter Bridge‘s new U.S. tour leg stopped at the Sands Event Center last night in Bethlehem, PA. The trek is in continued support of their latest opus Fortress which came out nearly a year ago, and ranked #14 on TheRockRevival.com’s Top 50 Rock Albums of 2013. This past spring, the band performed in America and Europe at Rock On The Range, Welcome To Rockville, Grasspop Metal Meeting, Sweden Rock Festival, Rock am Ring, and more. Over the summer, lead guitarist Mark Tremonti took time to work on his next solo effort while frontman Myles Kennedy hit the road with Slash on the Let Rock Rule Tour alongside Aerosmith. Alter Bridge are back at it again now, and despite touring on a record that’s a year old they’re still showing us why they’ve been one of the best and brightest heavy music acts over the last decade.

The band took the stage after a fantastic performance by California Breed, a new act that features legendary 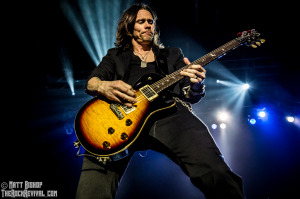 frontman Glenn Hughes (Deep Purple, Black Sabbath) and rising star guitarist Andrew Watt. Alter Bridge then took the stage opening with “Addicted To Pain”, the lead single off Fortress. It’s at this point in an album cycle where bands begin to tire, and show signs off being on the road a bit too long. This was not the case for Alter Bridge last night. They brought it like they always do, and looked like they were having fun doing it as well. The band proceeded to play a balanced set that slightly favored their masterpiece Blackbird (2007).  Alter Bridge are one of the very few bands in rock that seamlessly blend brutally heavy riffs and gorgeous melodies into the melting pot that is their signature sound. The band bounces from soaring songs like “Cry of Achilles”, “Ghosts of Days Gone By”, “Blackbird”, Myle’s acoustic performance of “Watch Over You”, and “Waters Rising” with Tremonti on vocals to face-pummeling  tracks like “Isolation”, “Come To Life”, “Ties That Bind”, and “White Knuckles” thanks to the thunderous rhythm section of bassist Brian Marshall and drummer Scott Phillips. the band have found great balance in their live show. 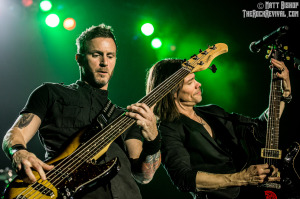 Alter Bridge formed in 2004 and released their debut album, One Day Remains, later that same year via Wind-Up Records. The album hit #5 on the Billboard Top 200, and eventually was certified gold. The band toured hard from 2004-2006 and then began writing new material for their next album. They inked a deal with Universal Republic Records, and released their sophomore effort, Blackbird, in 2007. The disc hit #13 on the Billboard Top 200 #4 on US Top Rock Albums, and #2 on UK Rock Albums. It sold over 47,000 copies in it’s first week of sales. The band embarked on an extensive world tour to support the record, and recorded the live DVD, Live From Amsterdam, on December 7, 2008. In 2009, Alter Bridge took a break, as Tremonti, Phillips, and Marshall reunited with Scott Stapp for a Creed tour, and Myles Kennedy went to work with Slash.

In 2010, they returned triumphantly with their third studio LP, AB III. The album debuted at #17 on the 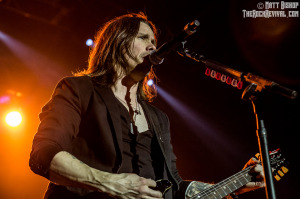 Billboard Top 200, and the album’s lead single, “Isolation”, hit #1 on Active Rock Radio. The band toured relentlessly, with appearances at some of the world’s biggest festivals including Rock am Ring, Rock im Park, Nova Rock Festival, Hellfest Summer Open Air, Download Festival, and Soundwave. In the summer of 2011, the band co-headlined the Carnival of Madness Tour alongside Theory of a Deadman, with special guests Black Stone Cherry, Adelitas Way, and Emphatic. On November 29, 2011, Alter Bridge recorded their show at Wembley Arena for the live DVD Live at Wembley. It was the largest headlining show of the band’s career. 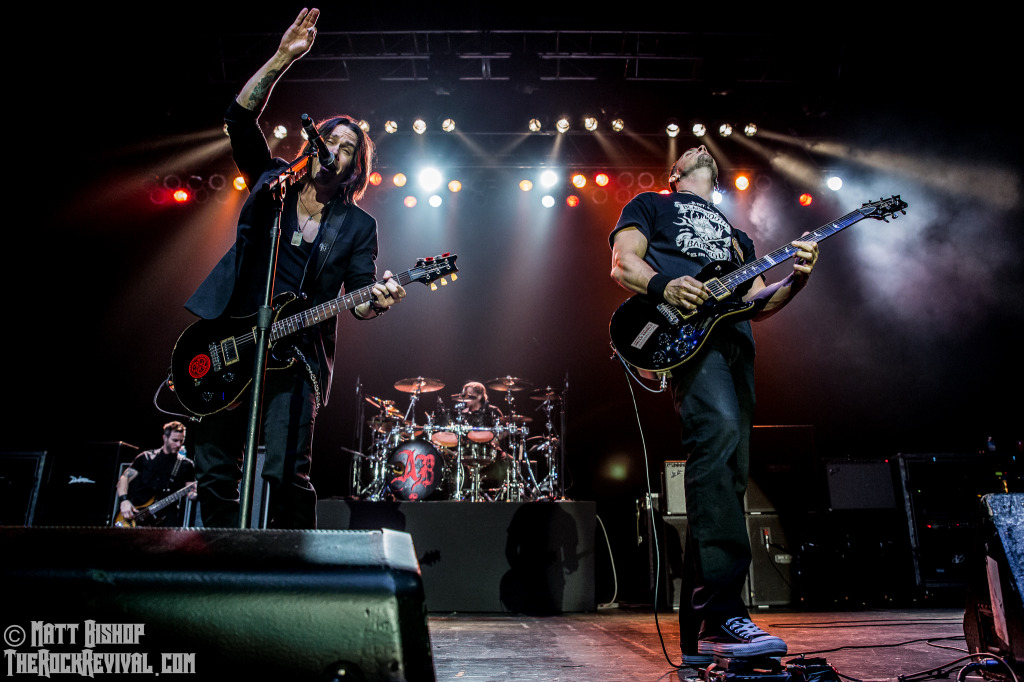 HIM and MOTIONLESS IN WHITE ANNOUNCE 2014 WINTER TOUR