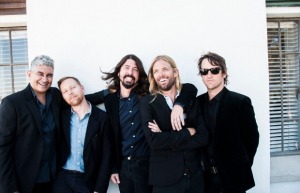 Next February, Soundwave Festival now has some serious competition. As the Foo Fighters continue to unravel their upcoming tour plans, the band announced today that they will embark on a month-long stadium tour of Australia with very special guests Rise Against. Foo Fighters are in the midst of a club tour in conjunction with their new HBO series Sonic Highways, and are set to play the Ryman Auditorium in Nashville, TN this Friday, October 31. This weekend, the band will headline Voodoo Music + Arts Experience in New Orleans, where Rise Against will also be a featured act. Rise Against recently wrapped up a North American headlining tour, and are set to head overseas for a European run starting on November 3 all in support of their latest effort The Black Market. Foo Fighers much-anticipated new album Sonic Highways drops on November 10 via RCA Records. – by Matt Bishop