Home » Buckcherry lighting it up on 2013 Confessions World Tour 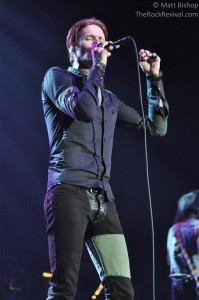 Since their 1999 smash-hit debut, LA bad boys Buckcherry have been lighting up audiences around the world. Carrying on the torch of their godfathers like Aerosmith, Mötley Crüe, and Van Halen, Buckcherry have consistently spit out hit after hit, and have remained one of the hardest touring bands in rock. All of this was evident on their May 29th stop at the Sands Event Center in Bethlehem, PA as part of the 2013 Confessions World Tour. Buckcherry recently released their new album, Confessions, to the surprise of critics and fans alike. We had all grown a custom to the band’s party rock anthems of sex, booze, and all around decadence, and their heart-felt love songs of heartache and apology. This time around, however, Buckcherry went to the dark side. The record is a concept album of sorts, with the subject matter illustrating the 7 Deadly Sins. It’s a very deep record, especially for a band like Buckcherry.

A few weeks ago, I sat down with lead guitarist Keith Nelson at Carolina Rebellion to talk about 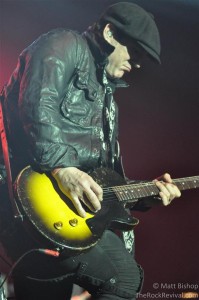 the album. He said that the fans had been very responsive to the band’s new direction on this album. This was very evident at the Sands, with the crowd going wild for the new Confessions material as well as the old-school hits. And, I have a confession to make: while Buckcherry is one of my favorite bands, I wasn’t sure if they could sell a lot of tickets at an arena the size of the Sands Event Center. Sure enough, they proved me wrong. They nearly sold the place out, and the fans were partying and singing along from the intro to the encore. The band left no stone unturned, playing songs from every album in their discography. 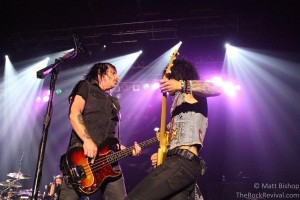 Buckcherry formed in 1997 and released their self-titled debut album in 1999. The album hit #1 on the Billboard Heatseekers Chart, and #74 on the Billboard Top 200. It would eventually be certified Gold by the RIAA. The record’s lead single, “Lit Up”, was the band’s first #1 hit, and was later ranked at #98 on VH1‘s 100 Greatest Hard Rock Songs. Buckcherry supported the album by touring with Lenny Kravitz, and taking part in the epic anniversary festival Woodstock ’99. After surviving that show, the band went on to tour with their heroes, AC/DC. After two years of hard touring, Buckcherry entered the studio again and released their sophomore effort, Time Bomb, in 2001. It spawned the hit single, “Ridin’”, and several other fan favorites. 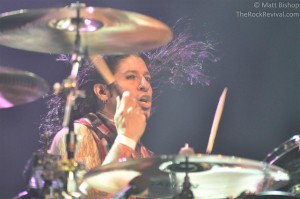 was nominated for the Grammy Award for Best Hard Rock Performance.  The band toured that summer on Crüe Fest with Mötley Crüe, Papa Roach, SIXX:A.M., and Trapt. The next few years would see Buckcherry enjoy their biggest commercial success ever, with 2008′s Black Butterfly and 2010′s All Night Long debuting at #8 and #10 respectively on the Billboard Top 200. On these album cycles, the band toured with the likes of KISS, Limp Bizkit, Hellyeah, and All That Remains. The band had featured slots at Rocklahoma in 2010 and 2012. by Matt Bishop