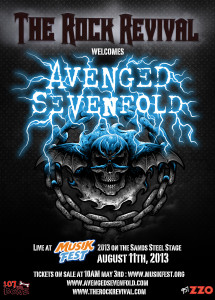 Finally. After three long years and much anticipation, Avenged Sevenfold have released a short album teaser video on their website. On the band’s site for months has been a old-looking television set just emitting static. Now, the above video has surfaced, giving much hope and amplifying the adrenaline of millions of fans around the globe. The Rock Revival will welcome A7X to Musikfest 2013 on August 11, and the band is also confirmed for Rock in Rio in Brazil on September 22.

Avenged Sevenfold have been one of the premiere rock bands in the world for nearly a decade. In 2002, the band signed with Hopeless Records and released their debut LP, Sounding The Seventh Trumpet. The band toured in support of the album with Mushroomhead, Shadows Fall, and more. A year later, the band returned with a much sharper sound on their sophomore effort, Waking The Fallen. In 2003 and 2004, the A7X toured on the Vans Warped Tour, and the video for their single, “Unholy Confessions”, received massive airplay on MTV’s Headbanger’s Ball. In 2004, Avenged signed with Warner Bros. Records, and released their third album and major label debut, City of Evil. The disc took the band to the next level, debuting at #30 on the Billboard Top 200 and selling over 30,000 copies in it’s first week of sales. The band played the mainstage at Ozzfest 2006 alongside Disturbed, System of a Down, Hatebreed, and more. They won the award for Best New Artist at the 2006 MTV Video Music Awards. They returned to Warped Tour for a third run, this time as the headliners, and emarked on their own Cities of Evil Tour in support of the album, which eventually went platinum.

In 2007, Avenged released a new self-titled studio album, the band’s fourth. It debuted at #4 on the Billboard Top 200, produced five 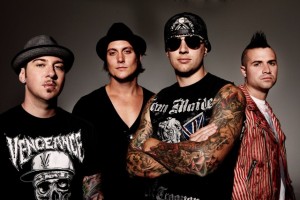 hit singles, and sold over 90,000 copies in it’s first week of sales. The album quickly went gold, and won the award for Best Album at the 2008 Kerrang! Music Awards. That same year, the band headlined the Taste of Chaos Tour, with Bullet For My Valentine, Atreyu, and Blessthefall. After that tour, the band released a live CD/DVD from the last show of the tour in Long Beach, CA, Live in The LBC & Diamonds In The Rough. The CD also included rare B-sides and cover songs of Pantera, Iron Maiden, and Black Sabbath. In 2009, the band began work on their fifth studio album. On December 28, 2009, as they were nearing completion of the record, tragedy struck when drummer Jimmy “The Rev” Sullivan passed away in his home at the age of 28. The band carried on, and enlisted the services of The Rev’s icon – Dream Theater drummer Mike Portnoy. In 2010, Avenged Sevenfold released Nightmare. Arguably the best effort of their career, the album debuted at #1 on the Billboard Top 200, and sold over 163,000 copies in it’s first week of sales. 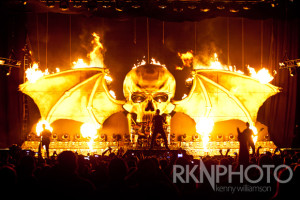 On January 20, 2011, Avenged Sevenfold announced that Arin IIejay would be the band’s touring drummer. That summer, the band headlined the Rockstar Energy Drink Uproar Festival, with supporting acts Three Days Grace, Seether, Bullet For My Valentine, Escape The Fate, and more. In October 2011, the band co-headlined the 48 Hours Festival in Las Vegas, NV along with Korn, Godsmack, and Five Finger Death Punch. In November, they embarked on a brief headlining tour, The Buried Alive Tour, with special guests Asking Alexandria, Hollywood Undead, and Black Veil Brides. The band took a break from touring in 2012 to relax and write. In April 2012, they took to the stage again, touring through Asia, and played Metallica’s Orion Music + More Festival in Atlantic City, NJ in June.

On September 24, they released a new single, “Carry On”, which was featured in the video game Call of Duty: Black Ops II, and is nominated for the award for Best Song at this year’s Revolver Golden God Awards on May 2. Since then, the band has been writing music for their new album, which frontman M. Shadowstold Revolver Magazine, has a “Zeppelin-meets-Sabbath” sound to it. The recording process began in January 2013, Avenged Sevenfold’s sixth studio LP is expected to drop sometime in the coming few months. In addition to headlining Musikfest 2013, A7X are also confirmed to play Rock in Rio in Brazil this year. The band will co-headline the final night of the epic 7-day festival along with Iron Maiden and Slayer. With 2 Top 10 Billboard 200 albums, 7 Revolver Golden God Awards, 1 Kerrang! Award, and over 8 million albums sold worldwide, Avenged Sevenfold are one of the definitive bands of their generation, and are going to bring one hell of a show to Bethlehem on August 11. Musikfest, Welcome To The Family. – by Matt Bishop

Never Too Loud - A Conversation with Danko Jones

Sevendust black out the Rebellion - Interview with drummer Morgan Rose