Sevendust black out the Rebellion – Interview with drummer Morgan Rose 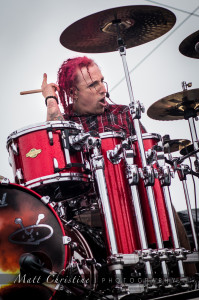 “Our setlist is so heavy. I hope this rain holds out, ’cause we’re gonna torch this place.” As Sevendust drummer Morgan Rose and I shared a quick handshake before our interview backstage at Carolina Rebellion, that’s what he said to me about the band’s upcoming set that day. Sevendust were already here to save the day, filling in for 3 Doors Down after tragic circumstances forced the band to cancel their spring tour dates. Then, bad weather hit, threatening the entire show right out of the gate. “If we get a chance to do this, we’re gonna try and just tear it down. Just give us a window. We just want a 40-minute window. We’re ready” Well, they got their window. And delivered a thunderous performance through driving rain. It ended up being one of the highlight sets of the weekend. As far as actually choosing the songs for this blistering set at this point in the band’s career, Morgan said that it’s no easy task anymore. “It’s tough, man. The toughest part is that nobody agrees in the band,” he commented jokingly.

Sevendust recently released their ninth studio album, Black Out The Sun, on their label 7Bros. 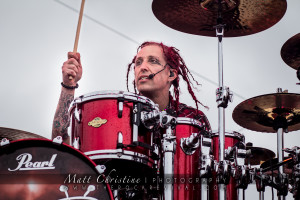 Records via Warner Music Group.  The video for the album’s first single, “Decay”, is out now as well. The highly-anticipated new record comes nearly three years after their previous effort, 2010′s Cold Day Memory. When I asked about the response to the album, Morgan stated, “Huge. Biggest one we’ve had in a long time.” The band also experimented with a different writing and recording process this time around, which Morgan and I discussed more in-depth in the interview. In between Sevendust albums, Rose and guitarist Clint Lowery set up shop at The Architekt Studios in New Jersey to record the debut album of their new project, Call Me No One. While this was going down, guitarist John Connolly and bassist Vince Hornsby teamed up with drummer Scott Phillips (Alter Bridge, Creed) and guitarist Eric Friedman (Tremonti, Creed)  formed the band, Projected.  Their debut album, Human, was released September 18 on Connolly’s own label, Yaya Papu LLC.

Sevendust formed in 1994 and exploded into mainstream metal with their 1997 self-titled debut album. The record went gold, and the band landed a coveted slot on Ozzfest ’98 alongside Ozzy Osbourne, Tool, Limp Bizkit, System of a Down, Incubus, Motörhead, Megadeth, Melvins, and Soulfly. In 1999, Sevendust released their sophomore mega-hit, Home. The album debuted at #19 on the Billboard Top 200. That same year, the band played the epic Woodstock ’99, which marked the 30th anniversary of the original festival. After two more studio albums, the band released the ultra-heavy Alpha, which debuted at #14 on the Billboard Top 200 in 2007. In 2008, the band saw the return of previously-departed guitarist Clint Lowery. The released a new LP, entitled Chapter VII: Hope & Sorrow. The star-studded LP featured appearances by Chris Daughtry (Daughtry), Mark Tremonti (Creed, Alter Bridge), and Myles Kennedy (Alter Bridge, Slash). The album debuted at #19 on the Billboard Top 200. In 2010, Sevendust released Cold Day Memory, which debuted at #12 on Billboard’s Top 200 chart, the highest debut of their 15 year career. – by Matt Bishop (Photography by Matt Christine)