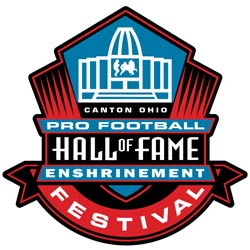 This summer, the 2015 Pro Football Hall of Fame Enshrinement Festival will feature the first-ever Concert for Legends with Aerosmith set to headline. The show will take place at Tom Benson Hall of Fame Stadium on Saturday, August 7, at 8pm EST. The concert will pay tribute to the legends of the NFL on the eve of the Enshrinement for the Hall of Fame Class of 2015. “When we started out, jocks did not hang out with long haired musicians longer than it took to beat them up,” says bassist Tom Hamilton. “Finally we have a meeting of the minds based on mutual respect. It’ll be a great honor to be there that night.”

“Having grown up since the age of 2, born in Lawrence, Ma., 45 minutes 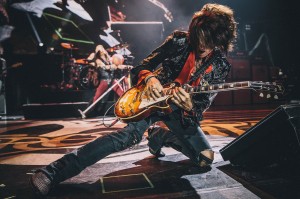 from Foxborough Stadium and seen the franchise grow has been an amazing experience,” says guitarist Joe Perry of the New England Patriots. “As Aerosmith began traveling the world and became our own Hall of Famers, seeing the Patriots under the brilliant guidance of the Kraft family, we would hear the news of our hometown team winning again as we were doing a show in a far flung corner of the world and we would swell with pride and think, ‘Ya those are our boys.’ The fact that American Football is worldwide news, shows the intensity of the game and the impact of how you play it. On behalf of Aerosmith we would like to congratulate all of you Hall of Famers, owners, the commissioner of NFL, and of course our hometown team the Patriots. To perform this show for the Pro Football Hall of Fame and the Hall of Famers is truly a great honor. You only get here by playing the game with all of your heart and soul. So we look forward to honoring all of you with a show that comes from the same place.”

Last summer, the band headlined Download Festival 2014 in Donington, UK. On February 26, for one night only, Aerosmith brought their theatrical experience Aerosmith Rocks Donington 2014 to the big screen. The live concert film will be screened in select theaters across the country. Tickets as well as a complete 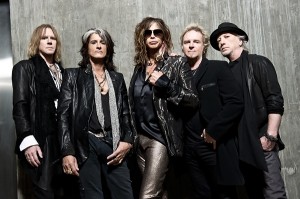 list of theaters and cities can be found HERE. Aerosmith embarked on the massive Let Rock Rule Tour this past summer with guitar great Slash. Aerosmith’s own guitar great, Joe Perry, recently released his memoir Rocks – My Life In and Out of Aerosmith. Aerosmith’s latest effort, 2012’s Music From Another Dimension, debuted at #5 on the Billboard Top 200 and #1 on Billboard Rock Albums via Columbia Records. It’s the band’s long-awaited follow-up to 2001’s Just Push Play, which hit #2 on the Billboard Top 200 and was certified platinum. In 2004, Aerosmith released a blues cover album Honkin’ On Bobo, that featured one original song. Their latest album was recorded in Los Angeles as well as at the band’s studio in Massachusetts. It was produced by Jack Douglas, Steven Tyler and Joe Perry, with the exception of three tracks produced by Tyler and Marti Frederiksen. – by Matt Bishop (Photos Courtesy of Aerosmith/MSO PR – Middle Left Photo by Zack Whitford Photography)