A Letter from Dave Grohl – Foo Fighters Take a Break 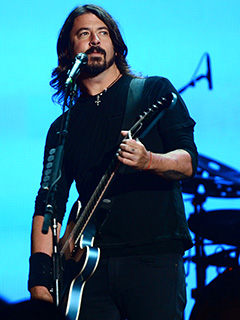 The Foo Fighters are one of the harder working bands in rock ‘n’ roll. At this juncture in their career, their decision to take a break comes as no surprise. Today, frontman Dave Grohl announced in a letter to fans that the Foo Fighters would be taking an indefinite break. The letter comes in light of a statement Grohl made on-stage this past weekend at Global Festival (what is now the Foo’s last gig for awhile). “Without making a big deal out of it, we don’t have any shows after this,” Grohl stated. “This is it, man. Honestly, I don’t know when we’re gonna do it again.” Immediately, the question was posed: are the Foo Fighters finished? Today, to the relief of Foo Fans everywhere, Dave released this letter:

Dave here. Just wanted to write and thank you all again from the bottom of my heart for another incredible year. (Our 18th, to be exact!) We truly never could have done any of this without you…Never in my wildest dreams did I think Foo Fighters would make it this far. I never thought we COULD make it this far, to be honest. There were times when I didn’t think the band would survive. There were times when I wanted to give up. But… I can’t give up this band. And I never will. Because it’s not just a band to me. It’s my life. It’s my family. It’s my world. Yes… I was serious. I’m not sure when the Foo Fighters are going to play again. It feels strange to say that, but it’s a good thing for all of us to go away for a while. It’s one of the reasons we’re still here. Make sense? I never want to NOT be in this band. So, sometimes it’s good to just… put it back in the garage for a while…But, no gold watches or vacations just yet…I’ll be focusing all of my energy on finishing up my Sound City documentary film and album for worldwide release in the very near future. A year in the making, it could be the biggest, most important project I’ve ever worked on. Get ready…it’s coming. Me, Taylor, Nate, Pat, Chris, and Rami…I’m sure we’ll all see you out there… somewhere…Thank you, thank you, thank you…

For the last year, in addition to touring, Dave Grohl has been working on a documentary about Sound City Studios, the legendary studio on the outskirts of Los Angeles where many classic albums have been recorded artists like Neil Young, Tom Petty, Fleetwood Mac, and…Nirvana. The film marks Grohl’s directorial debut, and will be accompanied by a soundtrack. Grohl is notorious for side projects, which include Queens of The Stone Age, Probot, and Them Crooked Vultures. And with drummer Taylor Hawkins and company being the talented musicians they are, I wouldn’t be surprised if we saw some non-Foo music emerge from this hiatus.

This break is a much deserved one. Foo Fighters are coming off yet another massive hit record, 2011’s Wasting Light. 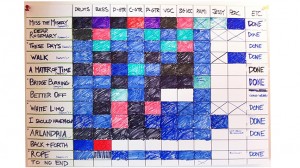 The album debuted at #1 on the Billboard Top 200. The album was produced by Butch Vig, who produced the legendary Nirvana album Nevermind. Keeping with the desire to create a rawer and heavier album, Grohl decided to record the album in his garage in Encino, CA. Wasting Light would go on to earn five Grammy Award nominations, including Album of The Year. The album won the award for Best Rock Album, and the song “White Limo” won Best Hard Rock/Metal Performance, and “Walk” won both Best Rock Performance and Best Rock Song. Foo Fighters also “Walked” away with a fifth Grammy that night – the award for Best Long Form Music Video for Back and Forth, a documentary on about the recording of Wasting Light. In support of the album, the band hit the road on the Wasting Light World Tour from December 2010 to September 2012. – by Matt Bishop (Photo of Dave Grohl [Top Left] Courtesy Emmanuel Dunand – AFP/Getty Images
Prev Post