In Transit with Adam Gontier of Three Days Grace

Life is starting over once again for Three Days Grace. With a new album on the way, the band kicked off their new tour and closed summer with a bang on Saturday at the 2012 Rock Allegiance Festival. I got a chance to sit down with frontman Adam Gontier on the band’s tour bus to talk about the new record. “Quite honestly, I think we all believe that Transit of Venus is definitely our best record to date…by far,” Gontier stated. The guys have been playing the album’s first single, “Chalk Outline”, to their set list at recent shows. 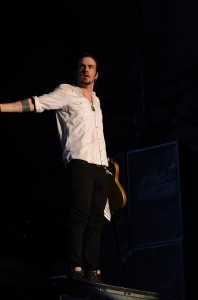 Much like the title of their upcoming album, Three Days grace as a band are in transit themselves, in a way. Their record label, Jive Records, was dissolved in October 2011 by it’s parent company, RCA Music Group. Three Days Grace, along with the label’s other artists, were absorbed by RCA Records. In regards to the transition, Gontier said, “In the beginning, when we knew that our label was no longer and we were being moved to a different, there was a bit of us wondering ‘what’s going happen?’.” He concluded by stating, “It feels like they [RCA Records] are he right label for the band.”

In 2009, Three Days Grace released their third album, Life Starts Now. The record debuted at #3 on the Billboard Top 200, and sold 79,000 copies in it’s first week of sales. The band proceeded to hit the road hard, embarking on a headlinging Canadian tour in 2009, and a winter US headlining tour with support from Breaking Benjamin and Flyleaf, and a spring leg followed with Chevelle and Adelitas Way. The band played the main stage on the 2011 Uproar Festival alongside Avenged Sevenfold, Escape The Fate, Bullet For My Valentine, and fellow Rock Allegiance artists Seether. The band concluded their epic 3-year run with a performance at the 48 Hours Festival in Las Vegas, NV. Afterwards, the band hit the studio to work on their upcoming album, Transit To Venus, which hits records stores on October 2. The band is wrapping up this tour leg in two days, but they have huge tour plans for the new year, kicking off in January 2013. New album. New tour. Get ready for more Riots. – by Matt Bishop (Photography by David Melendez) 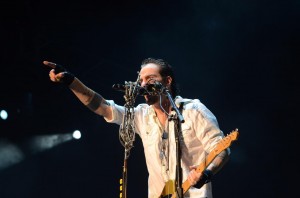 Welcome to the Revival of rock 'n' roll music. The way you used to hear rock, see rock, and feel rock is going to be shattered into a million pieces, reassembled, and revived. Dive into the realm of rock with interviews, concert coverage, and breaking news that make the music seem real again - in your ears, in your mind, and right in front of your very eyes. You'll feel the cool steel of the guitar strings and the smooth wood grain of the drum sticks right in your hands, all with the echoes of reverb in your head. This is the way rock was supposed to be experienced. Welcome to the Revival of rock 'n' roll music.
View all posts by Matt Bishop →
Tagged  2012 Rock Allegiance Festival, Adam Gontier, Three Day Grace, Transit of Venus.
Bookmark the permalink.