Home » CALIFORNIA HEAVY – A CONVERSATION WITH TONY CASTANEDA OF KYNG

CALIFORNIA HEAVY – A CONVERSATION WITH TONY CASTANEDA OF KYNG 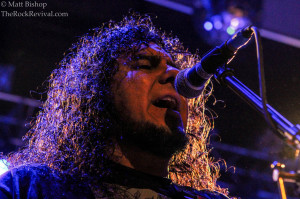 When In This Moment decided to embark on their Hellpop Tour this fall, they brought along an eclectic mix of heavy music. The four-band festival included In This Moment, gothic metalcore giants Motionless In White, sludgy death-metallers All Hail The Yeti, and, of course, Kyng. The self-proclaimed “California heavy” outfit brought a more traditional flavor to the tour. I got a chance to sit down with bassist Tony Castaneda backstage at the Sherman Theater in Stroudsburg, PA to talk about the tour, plans for a new record, and more.

It was an unseasonably cold night in northern Pennsylvania for the SoCal band, but 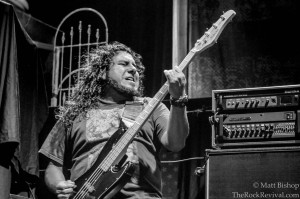 they’ve been making the best of the bitter weather. “We deal with it, you know,” Castaneda stated. “After a few shots of whiskey, we’ll be alright.”It’s goin’ great, man, we’re really excited to be out here,” Tony said of the tour. “It’s a really good tour to be on.” Obviously, with all the bands having their own niche in the heavy music scene, every show brings a very diverse fan base. “We’re trying to play to new people,” Tony said. “Motionless In White has a ton of fans, as well as In This Moment. It’s still the same genre, but a little bit of a different type of vibe in metal/hard rock. It’s been a challenge, but it’s a challenge that we’ve accepted gladly and I think we’re doing pretty damn well.” 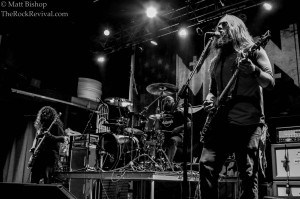 The band is getting close to releasing their sophomore effort, the follow-up to 2011’s Trampled Sun. “We’re in the mastering process, and we just finished up one of the last songs a few days ago,” Tony stated. “Now, we’re working on the artwork and hoping to release it in either January or February of 2014.” Tony also said the band is really excited to prove themselves to still be worth their weight in metal with their second album, as the sophomore release is often a huge measuring bar for a band. Tony also said that the band plans to tour relentlessly in the new year in support of the album starting in January.

Kyng formed in 2008 in Los Angeles, CA. The trio consists of vocalist/guitarist Eddie 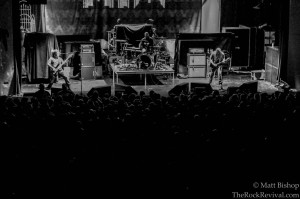 Veliz, bassist Tony Castaneda, and drummer Pepe Clark. After much writing, recording, and gigging, the band signed with Razor & Tie Records and released their debut album, Trampled Sun, in 2011. Kyng was immediately put on the hard rock map, and the band began touring relentlessly, including a performance at Rock On The Range, America’s largest rock festival, in 2012. The band just wrapped up the 2013 Hellpop Tour with In This Moment, Motionless In White, and All Hail The Yeti. They are currently mastering their next album and working on the artwork, which is tentatively due out in January or February 2014. Big tour plans are also in the works for Kyng, and will be announced in the imminent future. – by Matt Bishop (Photography by Matt Bishop) – KYNG Live Photo Gallery