Sludge metal titans Down have released a new music video for their single “We Knew Him Well”. The live clip was filmed at Southport Hall in New Orleans, LA by Mike Holderbeast and the Cement Crew. The track is a single from the band’s latest EP Down IV  – Part Two, the sequel to Down… Continue reading

This spring, Mastodon and Clutch will embark on a North American co-headlining tour with special guests Graveyard. The Seattle sludge metal band Big Business will provide support on select dates. The Missing Link Tour kicks off on April 16 at The Myth in St. Paul, MN and wraps up on May… Continue reading

It’s with a heavy heart that we report the passing of Black Tusk bassist Jonathan Athon. He passed away quietly yesterday at Memorial University Medical Center in Savannah, GA. Jonathan was removed from life support per his own wishes as a result from injuries sustained in a motorcycle accident on Friday, November 7.… Continue reading 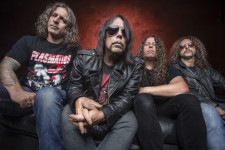 Today, Monster Magnet premiered their new music video for “The Duke”, the second single off their new album Milking The Stars. The band collaborated with acclaimed director Phil Mucci (Stone Sour, Opeth, Pig Destroyer) for the video. The album is a reimagining of their last effort, 2013’s Last Patrol which slipped into the Billboard Top 200 on it’s debut.… Continue reading

Monster Magnet have announced a brand new album Milking The Stars. The album is a reimagining of their last effort, 2013’s Last Patrol which slipped into the Billboard Top 200 on it’s debut. The new disc isn’t a remix album, but simply different interpretations of the songs; an movie with an alternate ending. Today, the… Continue reading