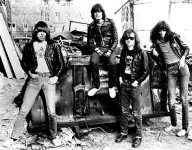 It is with great sadness that we report the passing of Tommy Ramone, the founding drummer of seminal punk rockers the Ramones. He was 62 years old. Tommy was the last original member of the band left alive. The Ramones formed in 1974, and released their self-titled debut album in 1976. The… Continue reading

It is with great sadness that I must report the passing of Century Media Records Co-Owner Oliver Withöft has passed away today at the age of 49. Oliver had been on a leave of absence due to illness for some time, and his passing leaves the music industry with a heavy heart today.… Continue reading