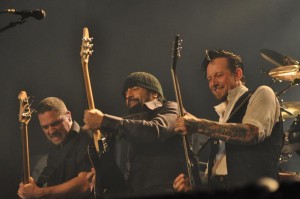 Danish metallers Volbeat have announced a North American Spring Tour with Trivium. The trek kicks off on April 3 at The Fillmore in Denver, CO and wraps up on May 9 at the Hampton Beach Casino Ballroom in Hampton Beach, NH. The tour will feature support from Digital Summer. This is Volbeat’s fourth North American tour trek in support of their latest effort, Outlaw Gentlemen & Shady Ladies, which came out back in April 2013. The record has taken the band to whole new level, giving them their first Top 10 debut on the Billboard Top 200 at #9. Volbeat are nominated for a Grammy Award this year for Best Metal Performance for the song “Room 24 (feat. King Diamond)”. The Grammys air this Sunday, January 26 at 8pm ET on CBS. 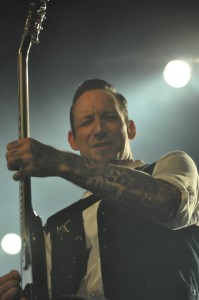 album, The Strength/The Sounds/The Songs, won the award for Best Debut Album at the 2005 Danish Metal Music Awards. Their second album, 2007’s Rock the Rebel/Metal the Devil, was certified platinum and the band won the award for Best Live Band and Best Album at the 2007 Danish Metal Music Awards. Their third album, Beyond Heaven/Above Hell, went platinum in Finland and Germany, gold in Sweden and Austria, and double-platinum in their native Denmark. The record also broke the band into the mainstream in the U.S. with the hit single, A Warrior’s Call, which garnered massive play on rock radio nation-wide. Over the past few years, Volbeat have been touring relentlessly, playing some of the world’s biggest festival stages including Rock On The Range, Carolina Rebellion, Download Festival, Hellfest, Wacken Open Air, and Metallica’s Orion Music + More Festival. In February 2013, it was announced that Rob Caggiano, who had been producing the band’s latest album and playing guest solos, had officially joined the band. 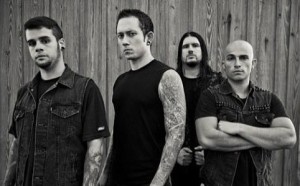 Trivium are enjoying the success of their sixth studio LP, Vengeance Falls, which debuted at #15 on the Billboard Top 200. This time around, David Draiman of Disturbed produced the album. Trivium just released the second single off the record, “No Way To Heal”. It was announced last week that the band will be playing Rock On The Range this May alongside Avenged Sevenfold, Kid Rock, Black Label Society, Chevelle, Slayer, Alter Bridge, Seether, Bring Me The Horizon, and many more. Digital Summer recently released an acoustic album, After Hours: Unplugges & Rewired, which featured two brand new tracks. In four days, the band will set sail on the Shiprocked Cruise along with Five Finger Death Punch, Papa Roach, Sevendust, Candlebox, Tremonti, Black Stone Cherry, Young Guns, and more. – by Matt Bishop (Volbeat Photos by Matt Bishop, Trivium Photo Courtesy of Trivium/Roadrunner Records) 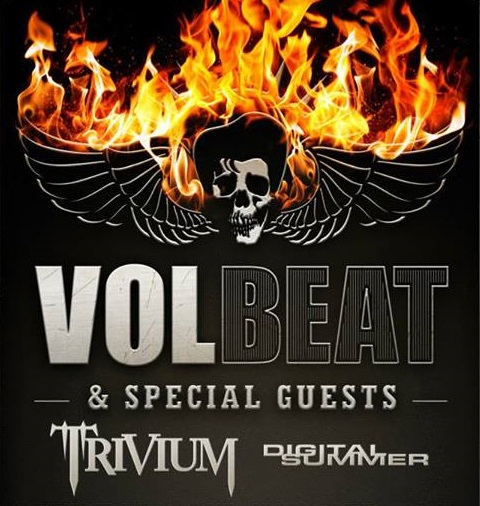