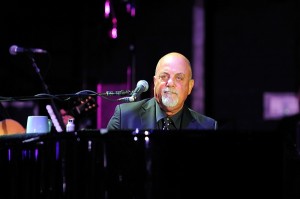 The iconic Billy Joel has announced a massive U.S. tour that will see the pianist and singer play arenas and stadiums around the country. The trek kicks off on January 17 in Tampa, FL at the Tampa Bay Times Forum and wraps up on September 17 at Madison Square Garden in New York City. The possibility remains for more dates to be announced both in between and into September and October. The frequent New York stops at Madison Square Garden are part of Joel’s monthly residency there, which begins on January 27. As of right now, there is no ending date for the residency. Throughout his career, Billy Joel has sold over 150 million albums worldwide. He has been nominated for 23 Grammy Awards, winning 6 of them. He was inducted into the Songwriters Hall of Fame in 1992 and the Rock and Roll Hall of Fame in 1999. Joel’s last studio album, 1993’s River of Dreams, debuted at #1 on the Billboard Top 200 and earned him four Grammy Award nominations. In 2001, he released Fantasies & Delusions, a full LP of all classical compositions. – by Matt Bishop (Photo Courtesy of Matt Kent – Redferns/Getty Images)