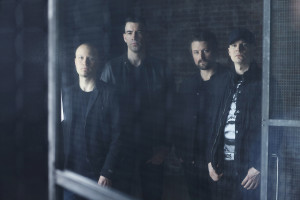 Today, Theory of a Deadman unleashed their punishing new track “Savages” featuring the one and only Alice Cooper.  The song is the title track off their upcoming new studio album which is due out July 29 via Roadrunner Records. In an exclusive interview with TheRockRevival.com a few weeks ago, frontman Tyler Connolly promised a slue of surprised guests on the record. He also stated that the album would be a much heavier outing for the band, as they slowly step outside their comfort zone. The upcoming disc is the follow-up to their 2011 effort, which debuted at #8 on the Billboard Top 200 and #1 on Top Rock Albums, Top Hard Rock Albums, and Top Alternative Albums. The band once again enlisted the services of longtime producer Howard Benson for the new record.Theory of a Deadman are set to tour later this summer into fall. They made a featured appearance at Rock On The Range 2014 back in May. Theory of a Deadman broke unto the scene in 2002 with their self-titled debut. Since then, all four of the band’s studio albums have charted in the Top 100 on Billboard. Their 2008 effort, Scars and Souvenirs, has been certified platinum. The band has toured with the likes of Mötley Crüe, Godsmack, Alter Bridge, and Black Stone Cherry. In 2011 they headlined the Carnival of Madness Tour, one of summer’s biggest touring rock festivals every year. – by Matt Bishop