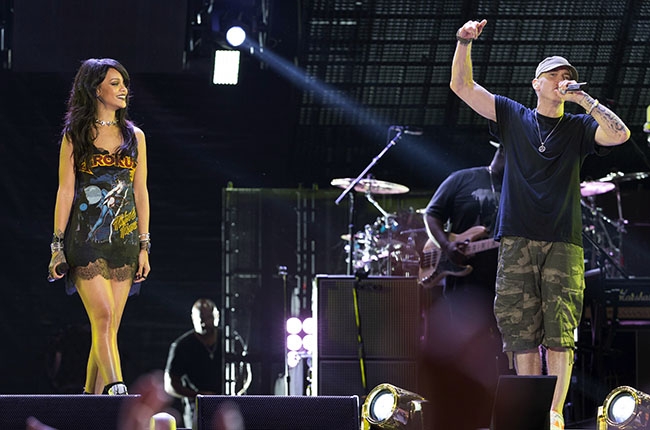 Deep down, we all want to be rock stars. Especially pop and hip-hop artists, so it seems. Rihanna is no exception, as she rocked a dress made out of an ’84-’85 Krokus tour t-shirt on-stage at the Rose Bowl at the first stop on her current co-headlining Monster Tour with rap icon Eminem. The front of the shirt-turned-dress features the artwork of the band’s “Midnight Manic” single off their 1984 gold-certified album The Blitz. No one can be too surprised, though, ’cause who doesn’t love heavy metal, am I right? It was very cool of this pop princess rep some metal on-stage. Krokus debuted in 1976 and had a string of successful records in the vibrant 80s metal scene. Now, thanks in part to Rihanna, their legacy lives on. The sad part is, she was probably just handed that dress by her designer and has no idea who Krokus even are. Hopefully after wearing it, however, she might be inclined to take a quick listen to The Blitz. So, will Rihanna be rocking a Scorpions dress tonight? Or maybe Iron Maiden? We can only hope. – by Matt Bishop (Top Photo Courtesy of Jeremy Deputat/Billboard.com)