NAPALM DEATH AND VOIVOD ANNOUNCE 2015 THROUGH SPACE AND GRIND TOUR

Grindcore icons Napalm Death and heavy metal legends Voivod have announced the 2015 Through Space and Grind Tour. The North American co-headlining run kicks off on January 27 at Grand Central in Miami, FL and wraps up on February 28 at Fitzgerald’s in Houston, TX. Support for the tour with be provided by Exhumed, Iron Reagan, and Black Crown Initiate. Additional acts on select dates include Ringworm, Dayglo Abortions, as well as Theories and Phobia. Napalm Death’s new album Apex Predator – Easy Meat arrives on January 27 via Century Media Records.

“As a celebration of both the unconventional and more straight-out methods of musical attack, I think this tour line-up really hits home,” said Napalm Death frontman Mark ‘Barney’ Greenway. “To think that 30 years ago I was marveling at the savage eccentricities of War and Pain and now I’m sharing stage/living space with Snake, Away and Co…surreal, almost. From Napalm’s perspective, we’ll bring the overdrive to the spaciness – it’s all going to rage whichever way you slice it.” Voivod drummer Michel ‘Away’ Langevin adds, “I am psyched to tour North America with Napalm Death, for which i always had a huge respect. We crossed path over the years and finally we’ll get to unite Voivod’s spacy Thrash Metal with Napalm’s Grindcore. A perfect combination!” – by Matt Bishop 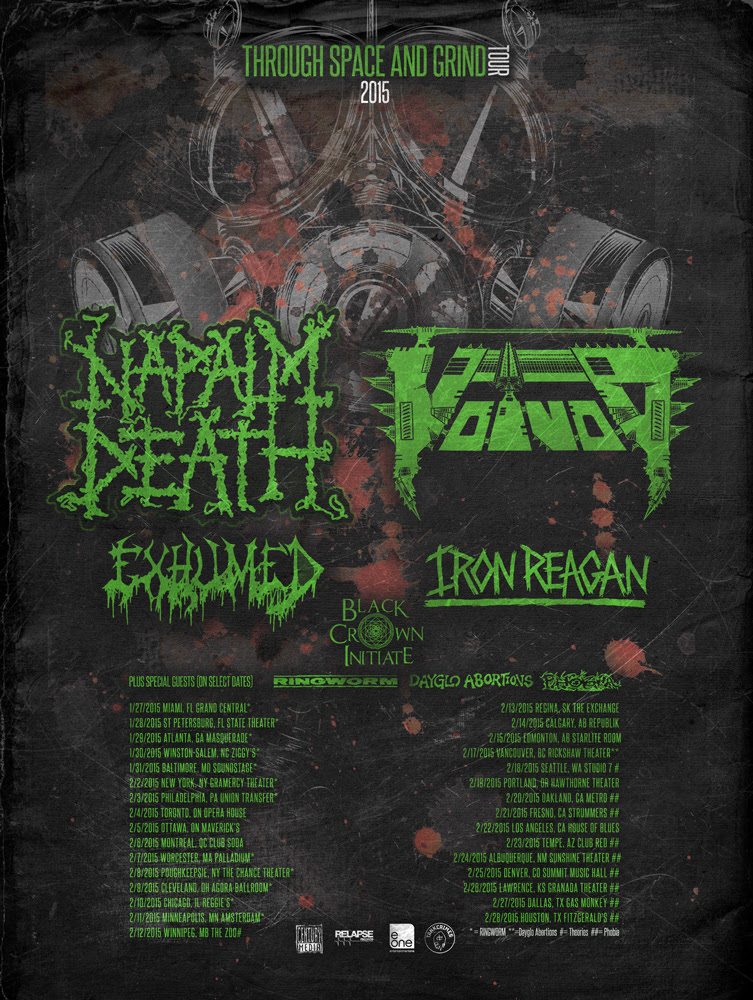